No good deed goes unpunished! People have a ton of opinions if you happen to be a stay-at-home parent. Some are fully supportive while others nitpick every tiny little thing that you do, demanding things that go beyond common sense and neighborly courtesy. It’s these slightly entitled folk who have the potential to give you a headache, even if you’re doing them a huge favor.

Case in point, one woman turned to Reddit’s AITA community for a verdict about how she handled a situation when her son’s friend, a picky eater, came over to their house unannounced. Seeing as her family is Indian, the redditor, naturally, cooks a lot of ethnic food at home. However, her son’s friend wasn’t a fan of ethnic food. No worries, though—there were some frozen chicken nuggets and fries to save the day and keep him happy. But, boy, did that backfire when the kid’s mom later learned he was given frozen food!

Read on for the full story and how the internet reacted. Meanwhile, check out Bored Panda’s interview about kids being picky about their food with talented pie artist and author Jessica Leigh Clark-Bojin.

A mom shared how her son brought over his friend, a fussy eater who wasn’t a fan of the ethnic cuisine the family cooked at home 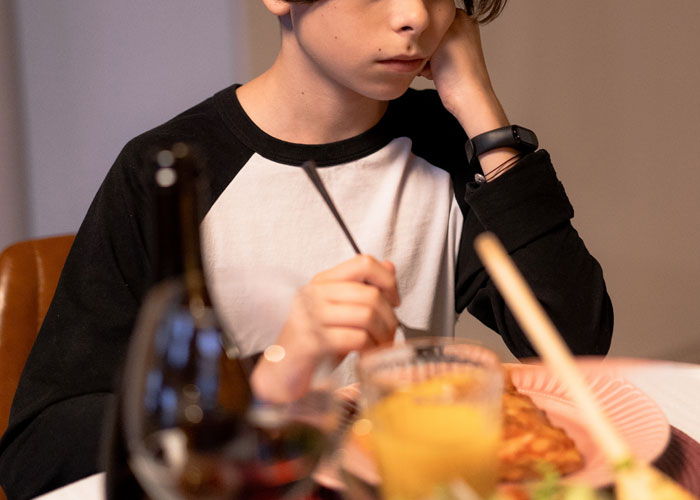 Not wanting the child to go hungry, the mom looked to the freezer for inspiration. However, she couldn’t have expected the drama that followed 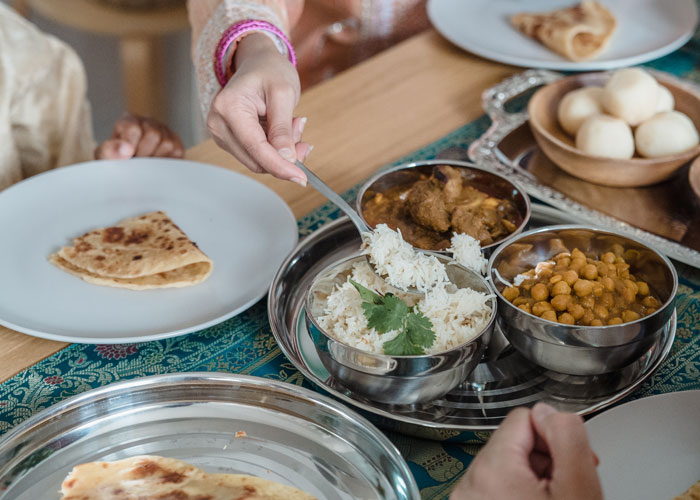 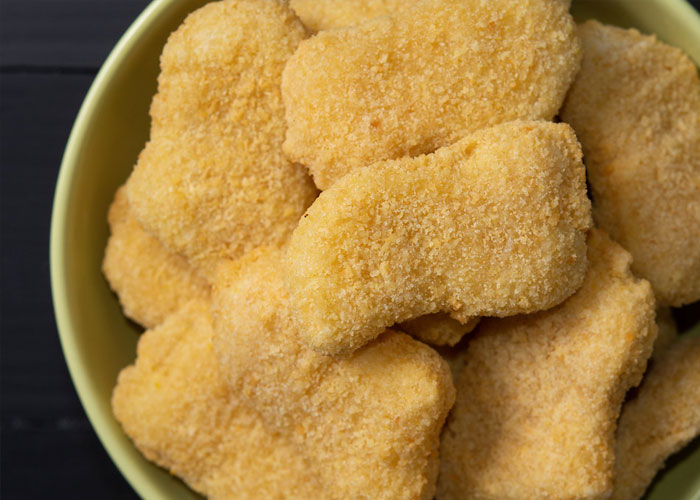 Truth be told, we’ll take each and every chance to eat chicken nuggets. Frozen or not, they’re our kryptonite. So it’s hard for us to even consider that someone might be mad after getting treated to a Meal from the Gods. (Look, if it’s good enough for Baby Yoda, it’s good enough for all of us.) However, it really doesn’t matter what the actual food was: the mom was kind enough to heat up some food for a picky eater who dropped by without any prior notice.

You really can’t expect someone to make a whole separate meal from scratch for someone when dinner’s already on the table. It might be something to consider with lots of prior warning and if there are certain dietary requirements that need to be met to keep the guest happy and healthy, sure, but this really wasn’t the case.

And it’s not like the kid wasn’t happy with the nuggets and fries (seriously, who can say ‘no’ to a classic combo like that?), it was his mom who had the issue. She thought that free childcare without notice wasn’t good enough—her precious baby boy needed a bespoke homecooked meal. What she called ‘child abuse’ really was just practicality and common sense. The vast majority of the AITA community members who read the post were confused about the picky eater’s mom’s over-the-top reaction.

Bored Panda reached out to pie artist Jessica to get some advice on what parents can do with picky eaters in the house. She said that one strategy parents could go for is hiding certain ingredients in other foods or simply naming things differently. A bit of creativity goes a long way. And it turns out that kids actually do like certain foods, just not the idea of them.

“My mum was occasionally successful in getting us to eat things we didn’t like by hiding the ingredients in other more innocuous foods. I refused to eat eggs in any form as a child. But I loved French toast, and never questioned the suspiciously-thick omelet-like covering on my syrup-drenched toast (I didn’t know that French toast involved eggs!),” she revealed to us.

“She would also trick us by telling us the food we were served was actually a different dish—one that she knew we tolerated. For example, my brother and I hated salmon but loved tuna fish. It never struck us as odd that sometimes we were served ‘pink tuna fish’ because it turned out we were actually totally fine with salmon, we just didn’t like the idea of salmon for some reason,” Jessica pointed out the fact that kids are just weird that way.

“Of course, when we were in our late teens our mum eventually fessed up and let us know that we had been eating eggs and salmon for decades and we might as well accept the fact that we like them now!” she said that the truth has to come out sooner or later. But by that time, it might not seem like a breach of trust. (I come from a family of picky eaters, I know how exhausting it can be to accommodate everyone’s preferences.)

However, the fact of the matter is that not every food can be disguised or hidden. Pie artist Jessica shared with us that she was an incredibly fussy eater as a kid.

“I am ashamed to admit it, but I didn’t try a shocking number of different foods until I was in my late teens,” she said, referring to “pretty much every vegetable that wasn’t a carrot.” That changed as she grew older.

“It wasn’t until I was invited to my first boyfriend’s home for dinner that it occurred to me that it might be time to broaden my culinary horizons. His mother frequently cooked ‘weird’ (not actually weird at all, but new to me) foods that I had always assumed I hated,” she told us.

“But out of a desire to not offend her, I, for the first time in my life, ate the hated foods… and it turned out I liked them! Societal pressure trumps parental tricks, threats, and bribery every time,” Jessica quipped.

The AITA community was overwhelmingly in support of the mom who wrote the post. Here’s what some of them said 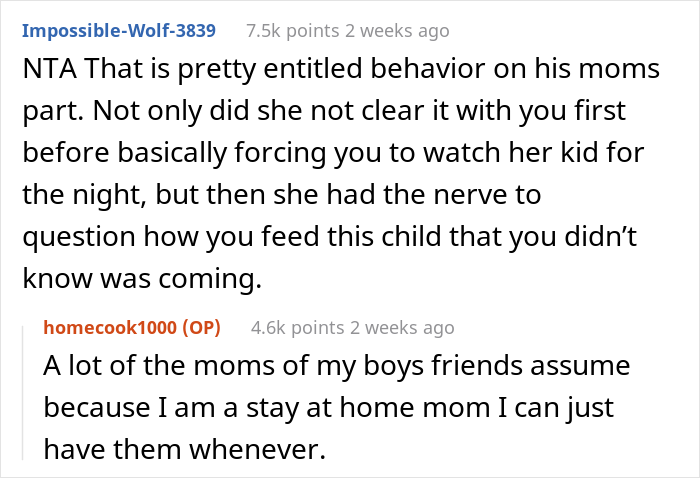 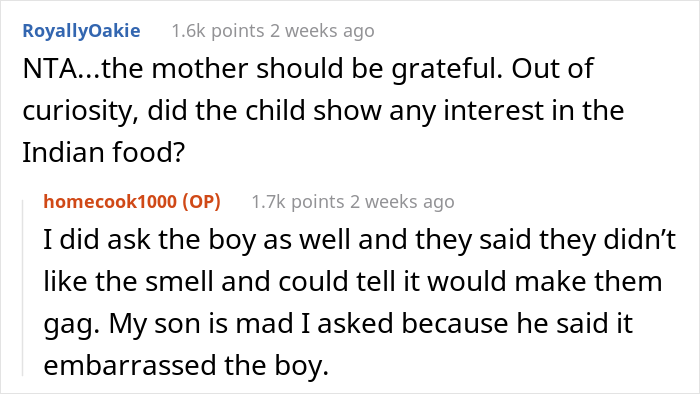 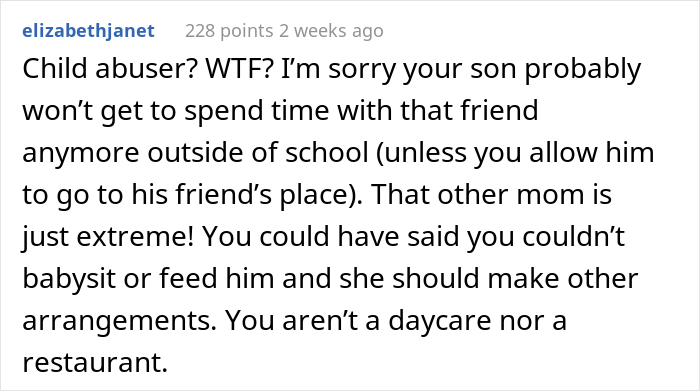 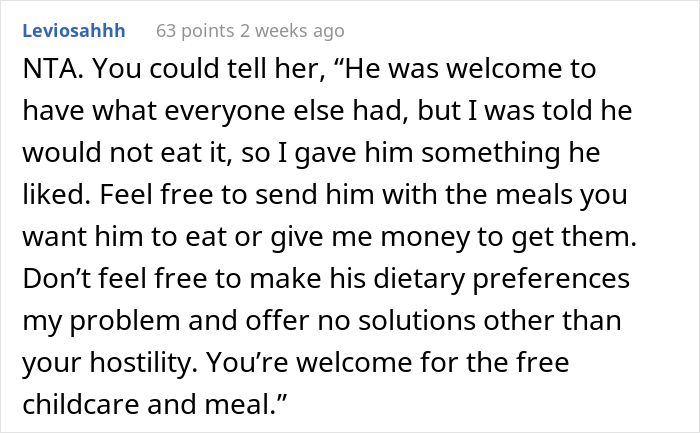 It takes a lot of work to broaden our culinary horizons. Korean cooking teacher Heather Jeong told ABC News that lots of people are scared or uncomfortable with the unknown. She believes that education is the key to getting people to embrace different foods.

“Once they gain knowledge and understanding, they embrace it,” she said, referring to “robust, pungent Korean foods” like kimchi. However, that requires overcoming our bodies’ instinctive reactions to stronger smells. Unfamiliar food smells can cause immediate responses that we’re not in control of. And that can put us off trying something new (but delicious!) until we find the courage to grab a fork and dig in. Chicken nuggets are good. But developing our palates is better.

The post Son’s Friend Doesn’t Eat Indian Food When He Comes Over, So The Mom Gives Him Frozen Chicken Nuggets For Dinner, Accidentally Causes Drama first appeared on Bored Panda.