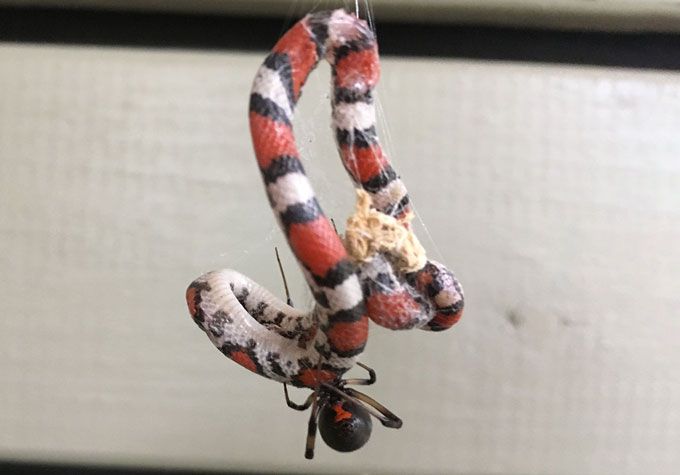 Yup. You’ve read the title correctly. There are spiders who prey on snakes, which could be up to 30 times their size. And not just any snake, mind you; these arachnids prey upon the most venomous snakes in the world.

Take the Australian redback. Not including legs, a female of this species of spider is only about the size of an M&M candy. But she can take down relatively big prey such as juvenile eastern brown snakes, which are among the most venomous serpents in the world. A snake that gets trapped in a redback’s web — a messy tangle of long, sticky silk threads that dangle to the ground — is quickly set upon by the spider, which subdues the struggling victim with more sticky silk before delivering a toxic bite that eventually kills the snake.

Biologist Martin Nyffeler describes this finding as “very fascinating and a little frightening”, and it really is what he describes.

But it’s not just the Australian redback spider that is capable of killing (and then eating) snakes, as there are at least 11 different families of spiders capable of doing the same thing.

More about this over at ScienceNews.