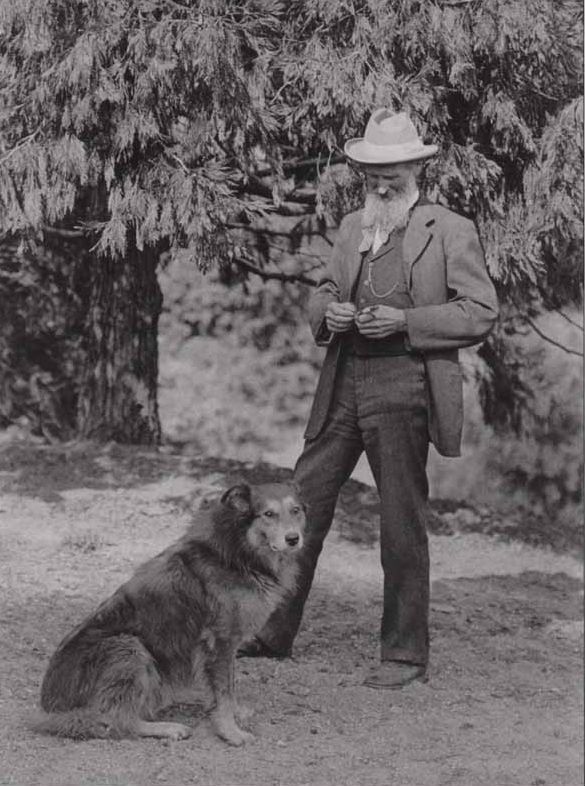 You know John Muir as the adventurer who helped create America’s national park system. In 1897, Muir wrote about his 1880 exploration of Alaska, a trip during which he found a new best friend, a dog named Stickeen. was not demanding; rather he was independent and aloof, giving no benefits to the team, yet he followed Muir everywhere. That included a solo exploration of a glacier during a storm.

The weather was now making quick changes, scattering bits of dazzling brightness through the wintry gloom at rare intervals, when the sun broke forth wholly free, the glacier was seen from shore to shore with a bright array of encompassing mountains partly revealed, wearing the clouds as garments, while the prairie bloomed and sparkled with irised light from myriads of washed crystals. Then suddenly all the glorious show would be darkened and blotted out.

Stickeen seemed to care for none of these things, bright or dark, nor for the crevasses, wells, moulins, or swift flashing streams into which he might fall. The little adventurer was only about two years old, yet nothing seemed novel to him. Nothing daunted him. He showed neither caution nor curiosity, wonder nor fear, but bravely trotted on as if glaciers were playgrounds. His stout, muffled body seemed all one skipping muscle, and it was truly wonderful to see how swiftly and to all appearance heedlessly he flashed across nerve-trying chasms six or eight feet wide. His courage was so unwavering that it seemed to be due to dullness of perception, as if he were only blindly bold; and I kept warning him to be careful. For we had been close companions on so many wilderness trips that I had formed the habit of talking to him as if he were a boy and understood every word.

On the way back, the snow worsened, and the original path was lost. Muir found himself on an ice island, with wide crevasses surrounding. There was one small ice bridge, so Muir carefully chipped handholds and footholds in it until he could cross, although he was well aware that it might be his last adventure. But what about Stickeen? It was at that moment that the dog seemed to realize that ice was slippery. Read the adventures of John Muir and Stickeen at Longform. It is a beautifully-written story. -via Metafilter