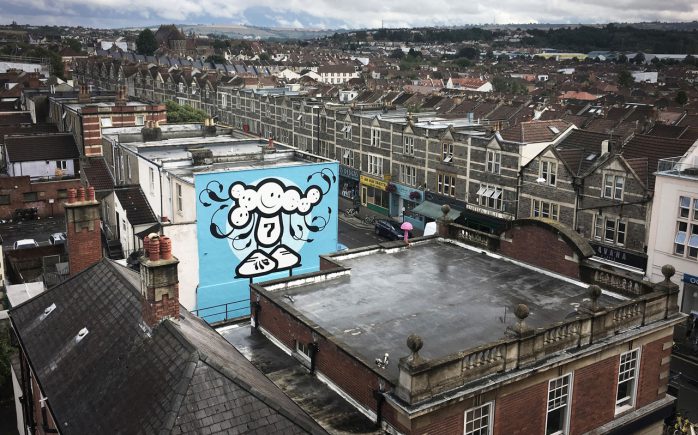 Upfest returned to celebrate its 10th anniversary recently with approximately 350 artists from across the globe leaving their mark on the streets of Bristol. A central theme across the whole weekend was the 100 years which have passed since some women first got the right to vote in the UK. For example, Jody Thomas‘ gold-masked figure takes the meek and victimized Little Red Riding Hood from Victorian fairytales and recasts her as someone who is both eminently capable and confidently self-assured.

The festival also saw The London Police bring their unusual combination of razor-sharp execution and cheeky sense-of-humor to the city for the first time with one of their multi-headed LADS characters. Two of the most engaging pieces were the trompe-l’œil works of Odeith and Insane 51; the former depicting an alligator in the Portuguese artist’s trademark anamorphic style and the latter featuring the Athenian artist’s double-exposure portraiture.

This year’s event also saw a sponsorship tie-in with The Simpsons which to some extent blurred the line between a conventional art festival and a more commercial venture, resulting in works by the likes of Nomad Clan, Soker and Bao all featuring the instantly recognizable yellow characters. Elsewhere across the festival, hometown artists including Paris, Lokey and Andy Council were joined by returning visitors to the city including  Annatomix, Caro Pepe and Louis Masai.