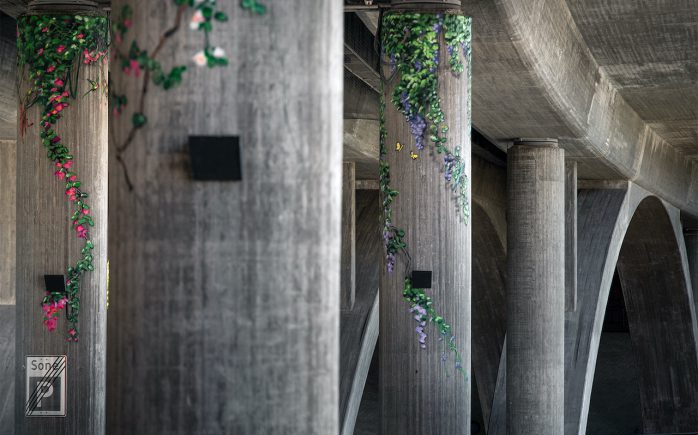 Recently in the Sandvika, Norway, Xenz was invited in to create a delightful new installation on some concrete columns under a railway bridge featuring his distinctive birds and butterflies. Completed over the course of five days, the Concrete Jungle was brought to life with the British artist’s colorful trompe-l’œil technique and gave him a chance to point out unexpected parallels between the Impressionst and graffiti movement. He further explains – “Putting paint in tubes gave the Impressionists the opportunity to work en plein air for the first time. In the same way, the portable nature of spray paint created new opportunities for making art in the streets like never before. I grew up painting in derelict warehouses in Hull but it wasn´t so much about replicating the New York style graffiti we were seeing in magazines and TV programmes. For me it was about using the tools and techniques of graffiti – which were readily available to anyone – to make the environment around us more beautiful.”

The project was one of four undertaken by the Xenz during a month-long stay in the Norwegian capital and was commissioned by Sandvika By in collaboration with Bærum kommune, and produced by Street Art Oslo. Take a look at more photos and a video documenting the process below…