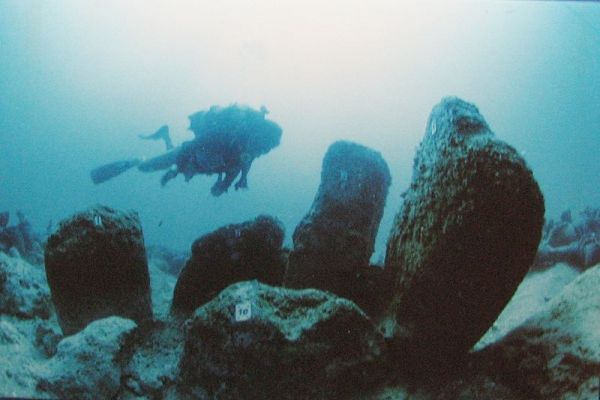 The myth of Atlantis may have arisen from the many real-life cases of cities that sunk into the water. There are quite a few reasons for this happening- earthquakes, tsunamis, changing ocean levels, and even deliberate acts such as dam building and dyke busting. Archaeological evidence shows us underwater places around the world where people once thrived, such as Atlit Yam in Israel, which sank around 6300 BC.

This Neolithic village lies 26 to 39 feet (8 to 12 m) beneath the Mediterranean Sea, hidden for over 8,000 years until marine archaeologist Ehud Galili discovered it while surveying the sand for shipwrecks in 1984, New Scientist reported. It is now considered one of the oldest submerged settlements ever discovered. Careful excavations have revealed rectangular houses with hearths and the remains of a dry-stone well. One of the most interesting finds was a megalith structure — similar to Stonehenge — built around a spring, made of seven huge stones weighing around 1,300 pounds (600 kilograms) each; burial sites and human remains have also been unearthed. One study suggests that a tsunami is likely to blame for the abandonment of the settlement, Live Science previously reported.

Read about eight sunken cities and what caused their demise at LiveScience. -via Strange Company