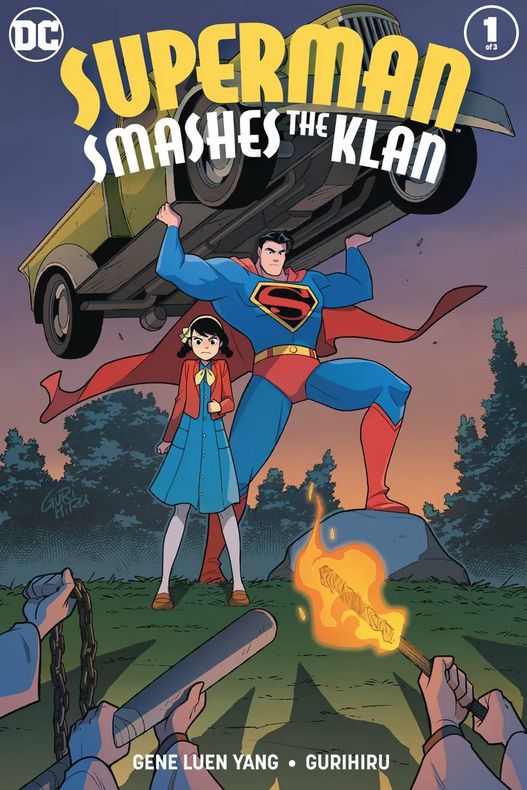 There’s a new Superman comic available in stores today, except it’s not exactly new, but a modern incarnation of an old story. Superman Smashes the Klan is the first of a three-part story in which the Man of Steel battles white supremacy and xenophobia.

The book comes from the award-winning cartooning team of Gene Luen Yang and Gurihiru, who were inspired by the 1946 Superman story “Clan of the Fiery Cross.” That story wasn’t a comic, but rather an arc of the immensely popular Adventures of Superman radio serial. In the audio adventure, Superman battled the racist machinations of the Ku Klux Klan. Excoriated and embarrassed by one of the country’s most popular radio shows, the white supremacist group actually saw a drop in membership.

Superman Smashes the Klan is the first time “Clan of the Fiery Cross” has been adapted to comics. And Yang and Gurihiru’s Superman is a classic 1946 Superman. He hasn’t figured out how to fly yet and he’s never seen kryptonite before, a nod to how many core aspects of the character originated in that very series. Writers on the The Adventures of Superman serial went on to introduce those elements, along with Jimmy Olsen, and Daily Planet editor Perry White, and the endlessly quotable “Look! Up in the sky! It’s a bird! It’s a plane! It’s Superman!”

Polygon spoke to author Gene Luen Yang about his approach to the project, and has a 16-page preview of the first chapter.  -via Metafilter