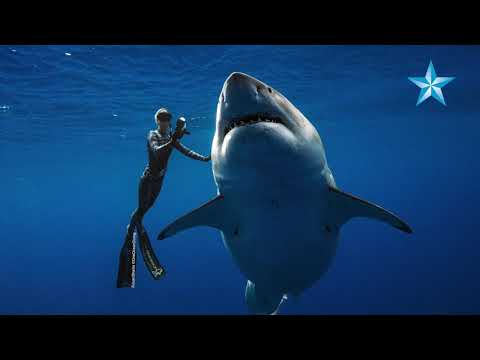 Don’t try this at home! Or anywhere. Hawaii diver Ocean Ramsey is a shark advocate and a victim of nominative determinism. The shark is named Deep Blue, who is believed to be 50 years old and pregnant, which is why she is so big and doesn’t act like the Hollywood version of a great white. On Tuesday, Ramsey and other divers were observing tiger sharks feeding on a whale carcass in the ocean off Oahu. Great whites don’t normally come close to Hawaii because the water is too warm, but Deep Blue hung out all day with the divers and some dolphins. Ramsey enjoyed the interlude.

She was especially thrilled because, based on the shark’s size and markings, she tentatively identified her as Deep Blue, a shark she has swum with on research trips to Guadalupe Island, Mexico. “I’m without words; it’s heartwarming; she’s probably the most gentle great white I’ve ever seen. Big pregnant females are actually the safest ones to be with, the biggest oldest ones, because they’ve seen it all — including us.” (Sharks only bite humans when they are curious or mistake people for their natural prey, she said.) “That’s why I kind of call her, like, a grandma shark.”

Read more about Deep Blue and Ocean Ramsey at the Honolulu Star Advertiser.
-via Geekologie