There’s a certain category of people who will go to any lengths to avoid paying for services rendered. Emotional manipulation, faulty logic, pretending to be a victim, guilt-tripping, screaming and shouting—they’ll go to any lengths to weasel their way out of parting with their cash. It can be incredibly insulting to a professional when they’re told that they should do something for free because they enjoy it. Artists of all kinds, especially, fall victim to these attempts at exploitation.

That’s exactly what happened to a professional tattoo artist who goes by u/rockpaperpowerfist on Reddit. He shared screenshots of his conversation with an annoying and entitled client on the r/mildlyinfuriating subreddit, and how he rejected them. The jobless client thought that they’d be able to convince the artist to work for free by calling their profession a hobby. A hobby!

Scroll down for the full story below, Pandas, and share your thoughts in the comments. Has anyone ever tried to get you to do your job for free? If so, tell us all about it so it can act as a warning to all the other Pandas out there on how to deal with entitled clients.

We reached out to David McKinlay, the owner of the Archangel 1608 Tattoo Studio in Glasgow, to get his take on entitled clients who demand getting inked for free, how it’s insulting to professionals when clients try to barter, and why it’s vital to respect your tattoo artist’s time. Read on to see what he told Bored Panda.

Some clients believe that simply because someone loves their job, it counts as a ‘hobby.’ These entitled people shamelessly ask professionals to work for free 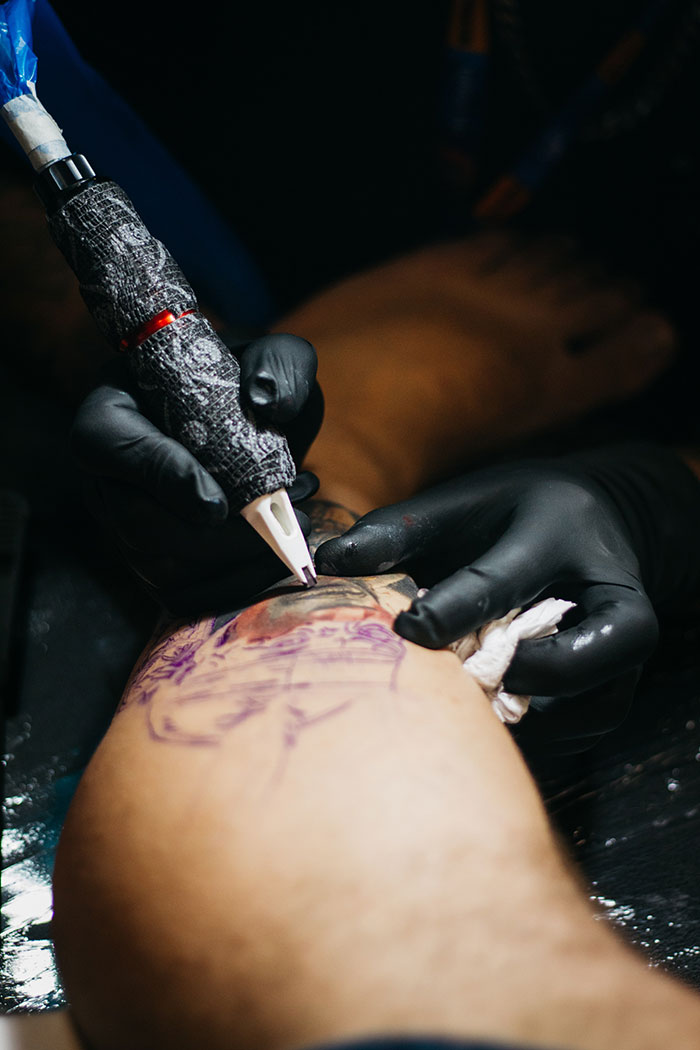 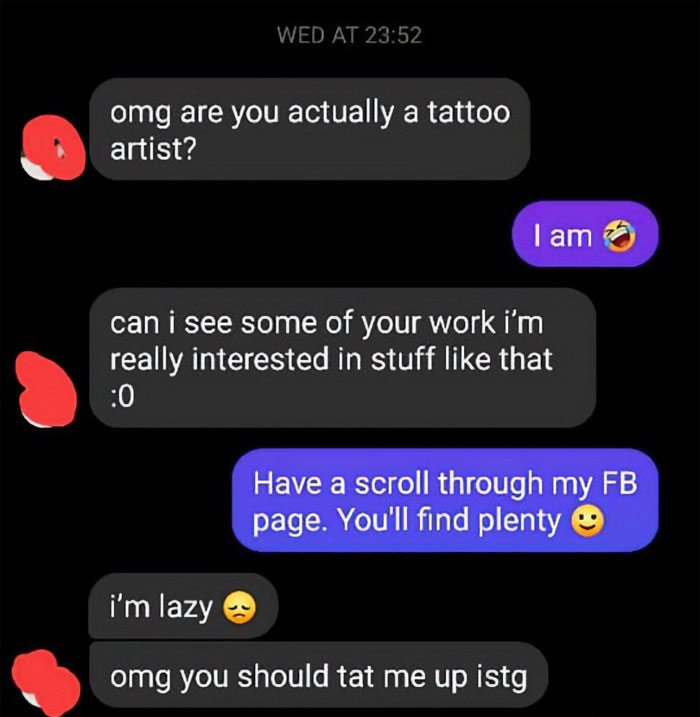 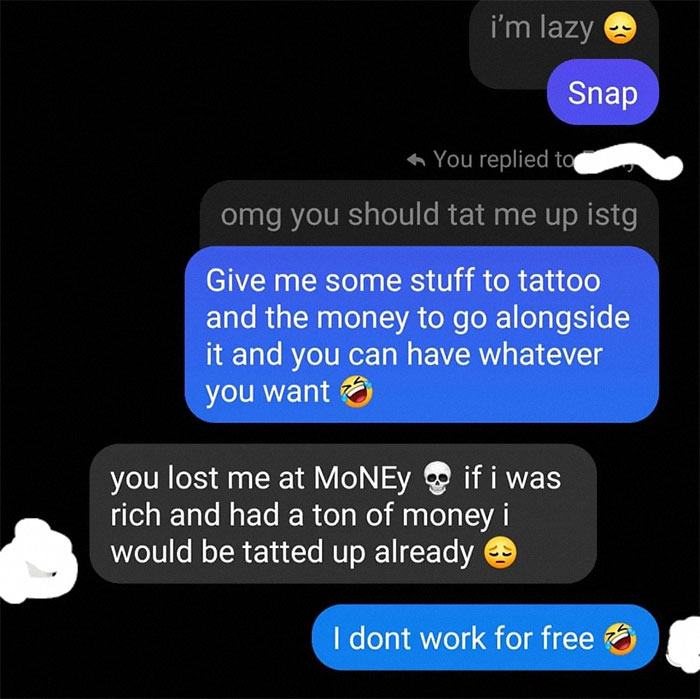 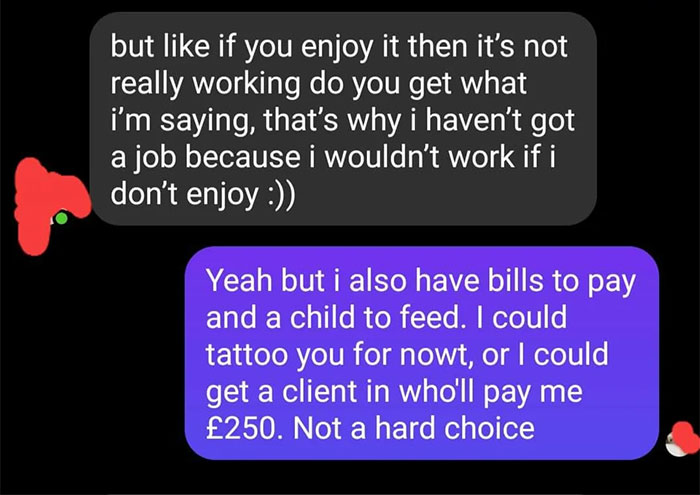 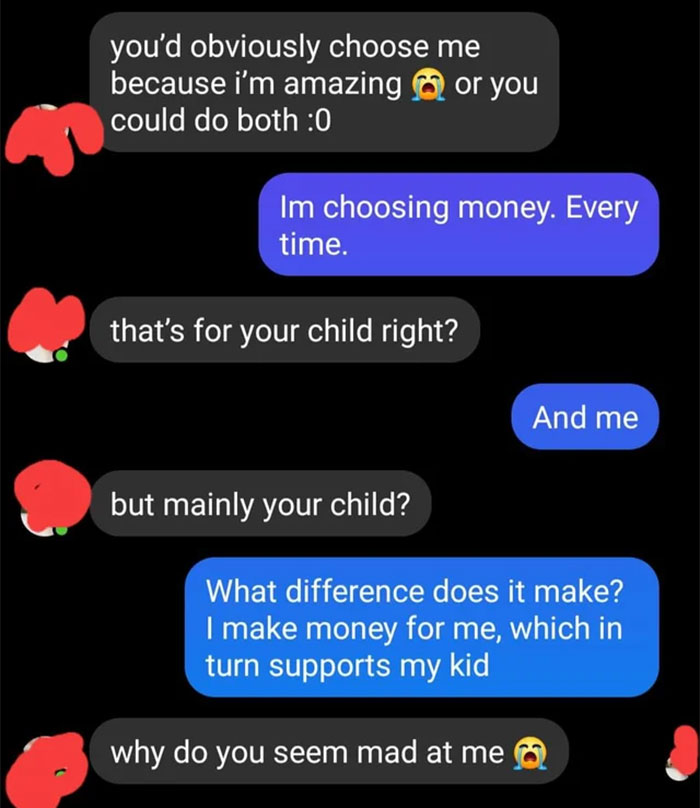 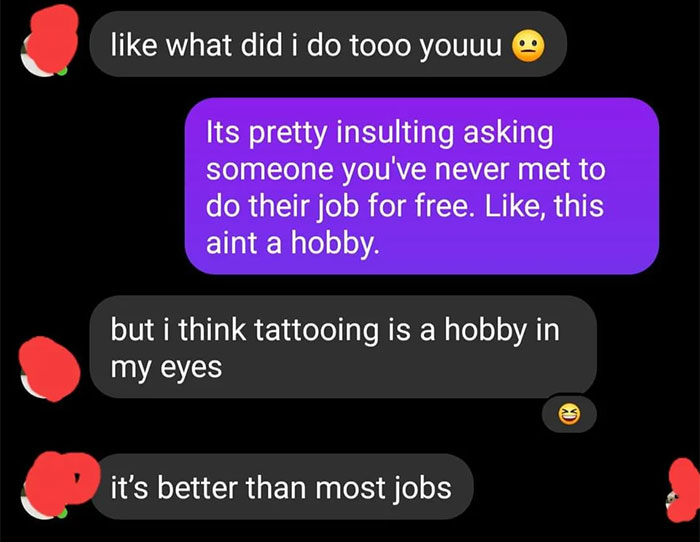 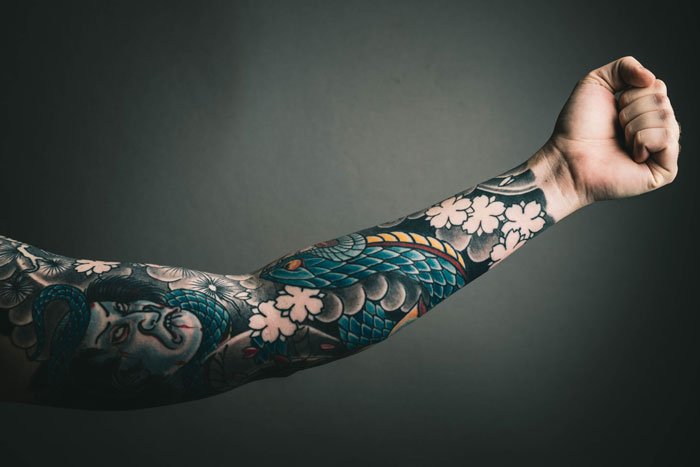 David, the owner of the Archangel 1608 Tattoo Studio in Scotland, shared his experience with difficult clients with Bored Panda. “We do get people asking for discounts, but it’s not as common as it was. I think we’ve a reputation now for not taking nonsense,” he explained. However, he pointed out that other professionals from different industries still get a lot of people asking for handouts, from bakers to hairdressers.

“It’s insulting though. These people trying to barter certainly don’t go into their supermarket or travel agent and try to get the price down,” he said that it’s specific industries that get targetted by people who try to get a better deal.

David himself has never had someone tell him outright that tattooing is a ‘hobby,’ however, he’s had to deal with people who certainly had that attitude. Some clients simply don’t respect these professionals’ time and think “it’s ok if people cancel last minute, or fail to turn up, as they think we can just do some drawings to fill our time, when we should be earning money.”

In David’s opinion, more folks definitely need to call out rude customers. “In the last couple of years, there’s been a rise in entitled, over-bearing, and spoilt attitudes from a certain minority that think the sun revolves around them… when it doesn’t! It shines out your tattooists butt!” he quipped.

Redditor u/rockpaperpowerfist’s story reached quite a few people on Reddit. Their post got 27.7k upvotes and started up an important discussion about not working for free. The OP also made everyone laugh by using the same logic as the client and suggesting that landlords shouldn’t charge rent because owning property is just a hobby, too. Imagine not having to pay rent when prices are going haywire, it would put at least one of our worries about the economy to rest.

A while back, Bored Panda spoke to Matt Dowling, the founder of The Freelancer Club, about artists being pressured to work for exposure. Matt’s project aims to eradicate exploitative unpaid work and late payments in the freelance sector.

“Many see freelancers, particularly in the creative sector, as hobbyists and believe they can get away with ‘paying’ in exposure. They leverage their audience size, their brand name, or the allure of gaining recognition. This is why services in exchange for exposure is commonplace in glamourous sectors such as fashion, music, and film,” Matt explained to us.

“From a freelancer point of view, they are often told that working for exposure is a rite of passage or an essential part of building a portfolio by their teachers, college professors, and peers. This has created a culture of exploitation that we must address at both ends,” he said.

“At Freelancer Club we take a hardline and suggest freelancers say ‘no.’ The issue is that some ‘freelancers’ are individuals with a passion who will freely give their work away for exposure whilst professionals rely on payment to survive. This muddies the water.”

According to the expert, working for free damages the creative’s career and harms the entire industry as a whole. That’s because other professionals are then taken less seriously and clients think that they can get away with asking them to take on projects for exposure.

“In the UK, unpaid work costs every freelancer £5,394 (7,086 dollars) per year and the figure is very similar in the States. If you give up your work for exposure thinking you will get paid work from it in the future, the statistics show this is rarely the case, besides, shouldn’t additional work be a consequence of a paid job anyway? If someone is willing to promote your work, they must value it so why not pay them! It’s easy to get into a cycle of working for exposure and never get paid,” Matt mused.

He said that the main reasons why people choose to work for exposure is because they hope to get paid work in the future, they hope to add to their portfolio, or they think that they can use the name of the company that promoted their work.

“In addition, knowing your creative work is being seen by lots of people feels good and strokes the ego. I believe there is a correlation between exploitative work for exposure and validation of choosing a creative career. Many creative people are told to ‘get a real job’ when they express their desire to do something artistic. Seeing their work in print, online, or gaining recognition somehow validates their decision and, in a twisted way, proves the doubters wrong. The irony is that they have given up their value to do so.”

Matt stressed the fact that creatives are talented and should value themselves in order for others to value them.

Meanwhile, if you happen to come across a rude or entitled client in your line of work, the best things that you can do are to stay cool, professional, and try not to take anything personally. Though at the same time, you shouldn’t stand for any abuse.

“Keep your cool and remember that whatever abuse they’re giving you is no reflection on you as a person. That customer doesn’t even know you, so there’s no way it could be. But on the other hand, don’t be subservient. Don’t be afraid to stand up for yourself and tell customers that abuse is not tolerated. And if it persists, hand them over to a manager as soon as you can and let them deal with it,” Alexander Kjerulf, from the Positive Sharing project, shared with Bored Panda during a previous interview.

“You have to remember that in many cases a customer who behaves badly is not necessarily a bad person—it can be a good person having a bad day and that’s why they’re acting out. But the sad truth is that some customers act this way because they’ve learned that it works and will get them discounts or preferential treatment,” he said.

The post “Tattooing Is A Hobby In My Eyes”: Entitled Client Wants This Tattoo Artist To Work For Free, Gets Rejected first appeared on Bored Panda.