There are varying degrees of dystopian corporate toxicity. Some companies try to pretend that you’re all one big happy family and try to distract you from real issues with free coffee and ping-pong tables. On the other end of the spectrum, you have workplaces that completely eradicate any sense of personal boundaries, forcing you to live for your job and sacrifice sleep.

Neither of these situations is healthy. And it can be hard to recognize when things are getting out of hand. But then you realize that you’ve got team meetings at 2 am to keep tabs on you and check if you’re still awake. And you think about the fact that you’re forced to check in with your colleagues about basic things like when you’re taking a shower. At that point, it might be time to think about a career change.

Popular TikTok content creator Devin Raimo, @devinraimo, spilled the tea about just how horrible working at her former corporate job really was. She explained how there were constant check-ins to see that people weren’t sleeping, and how the company would bother you even on your days off… like your sister’s wedding that you warned them about in advance!

Scroll down to see what Devin shared with the internet, and let us know what you think about it, dear Pandas. Do you have any stories about working insane hours? Share your experiences in the comments. Bored Panda has reached out to Devin’s PR representatives at the Oz Lane Agency, and we’ll update the article once we hear back from them. 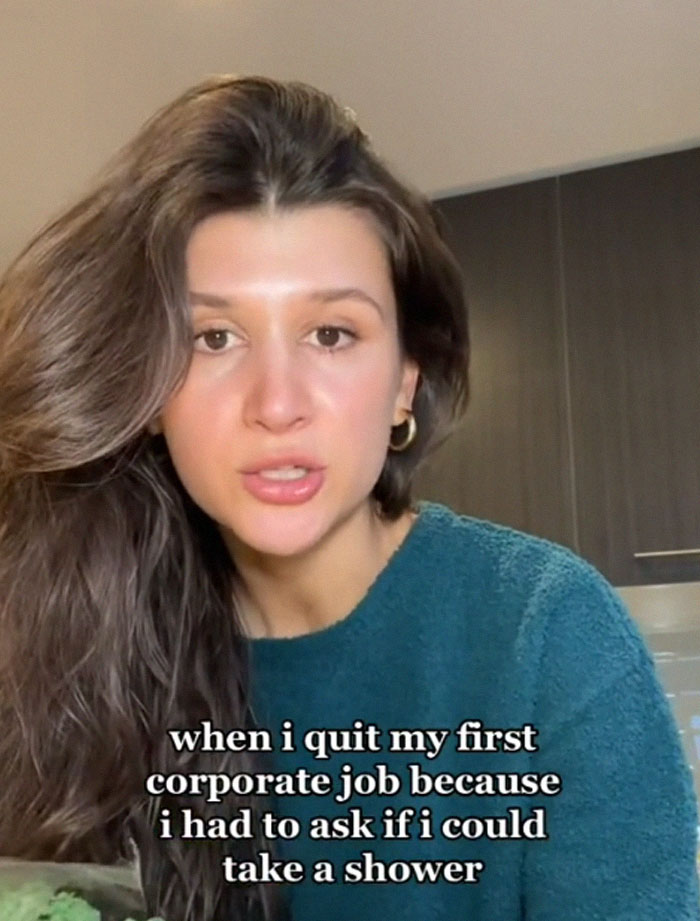 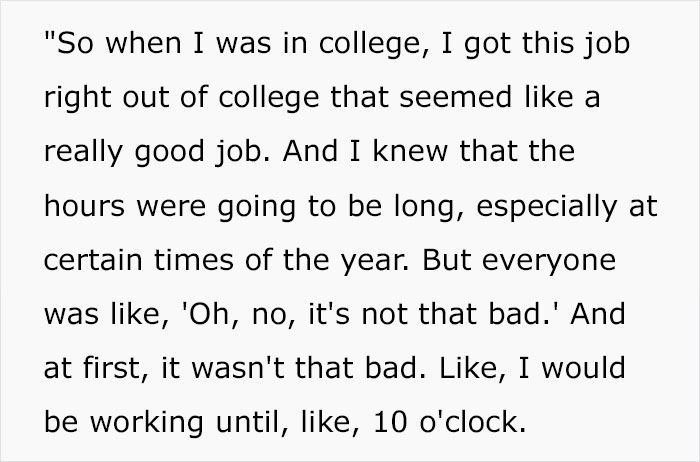 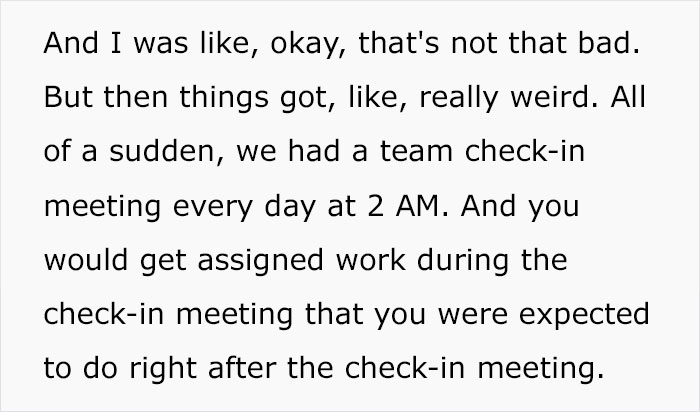 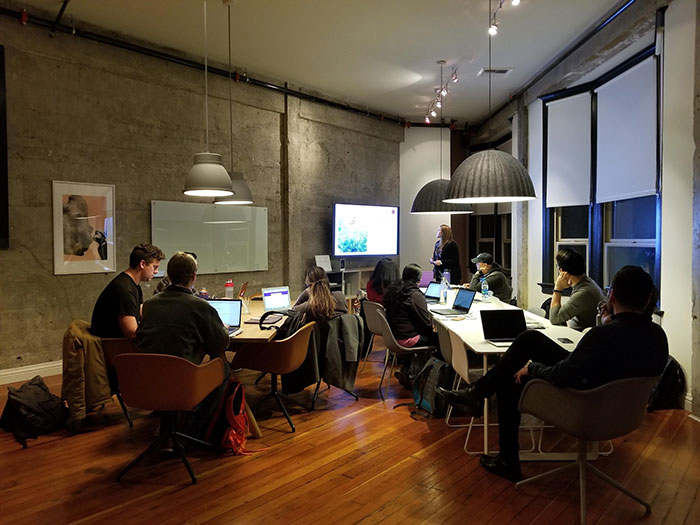 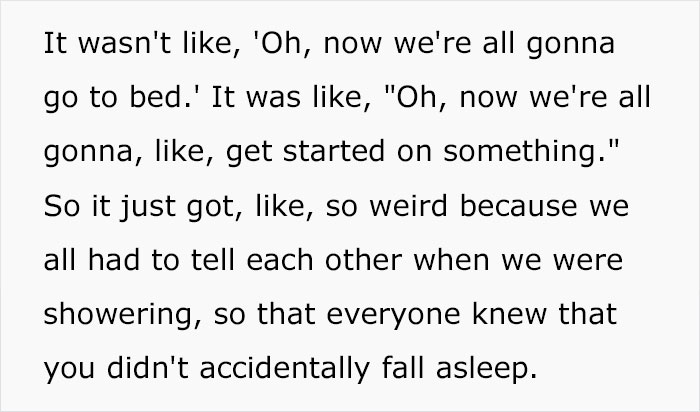 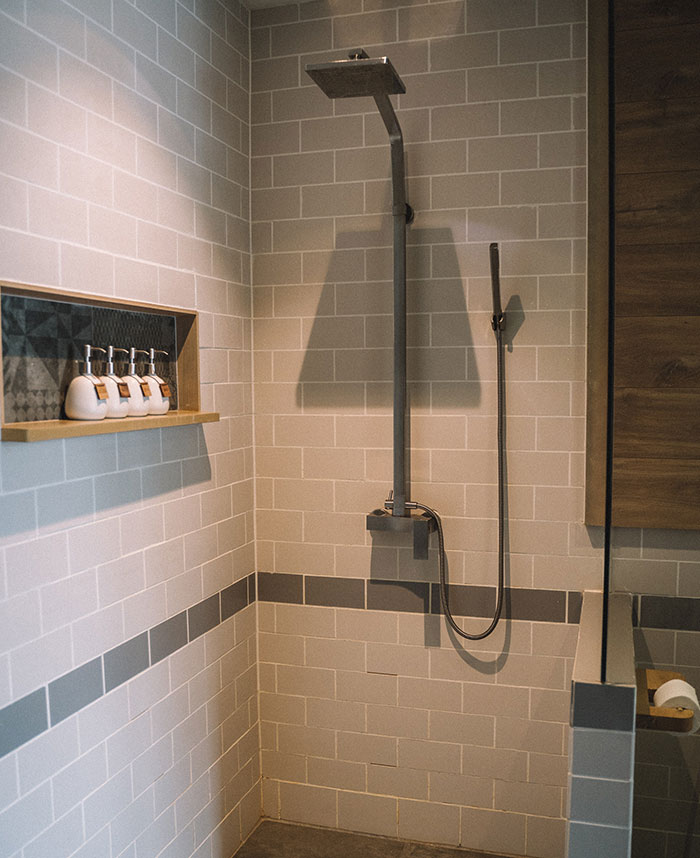 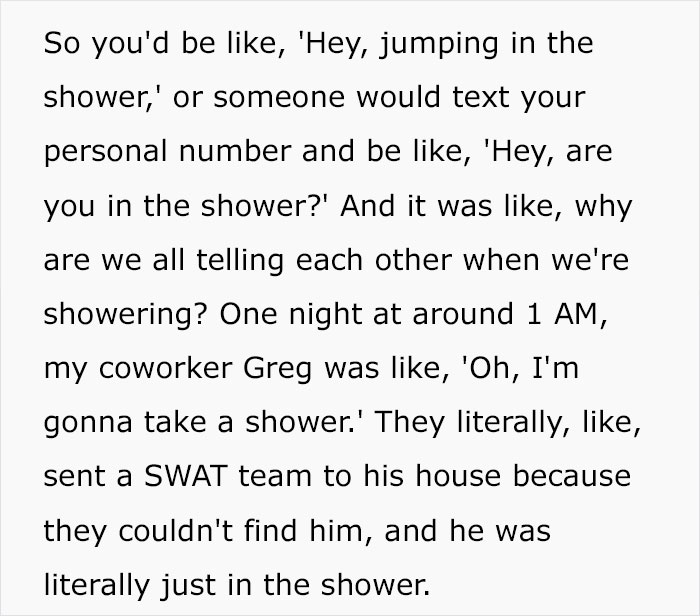 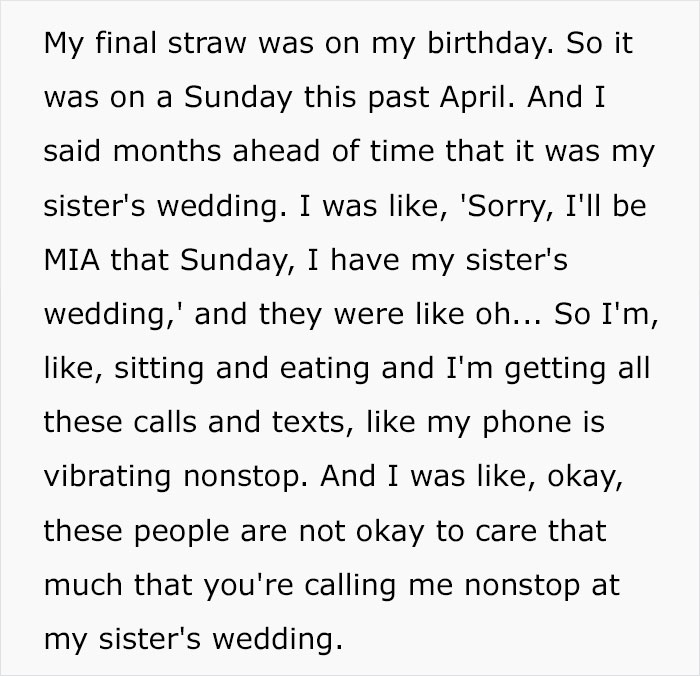 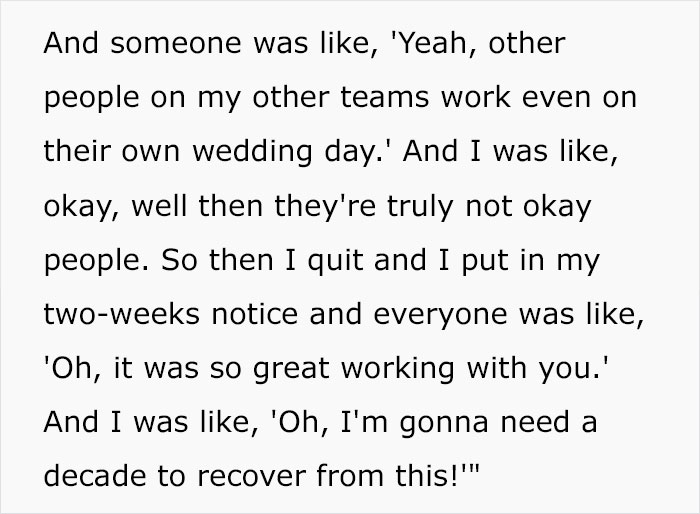 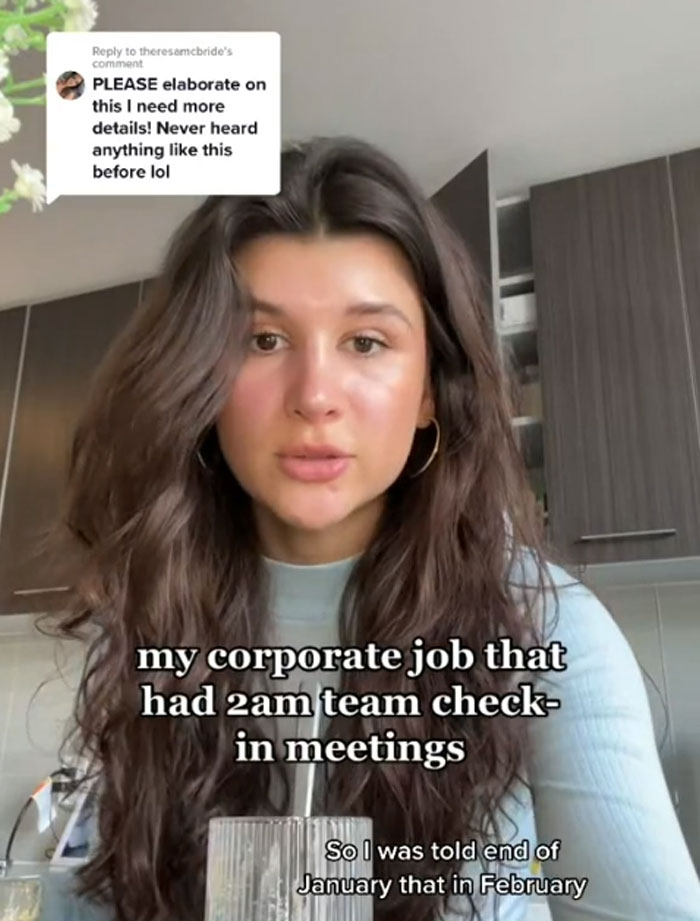 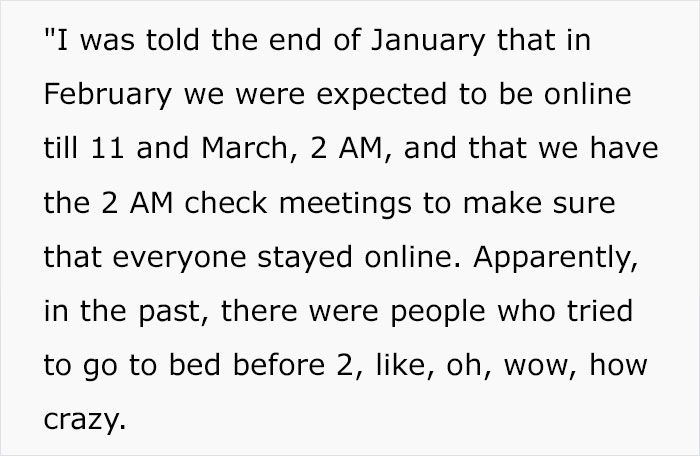 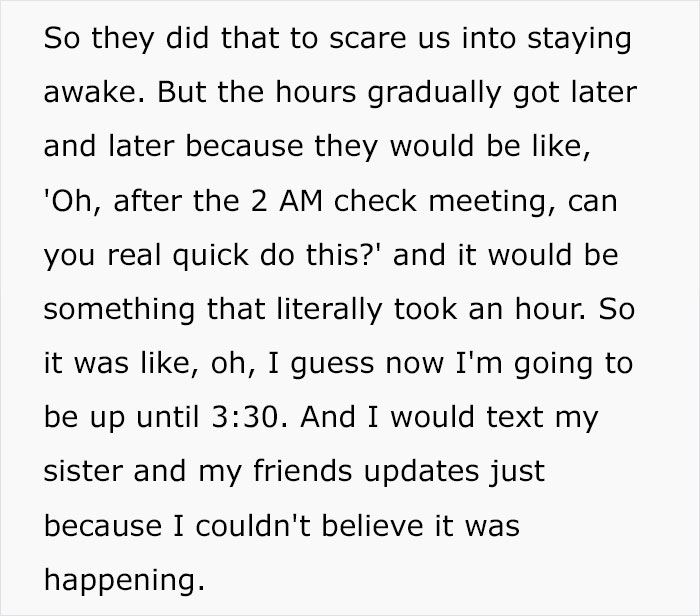 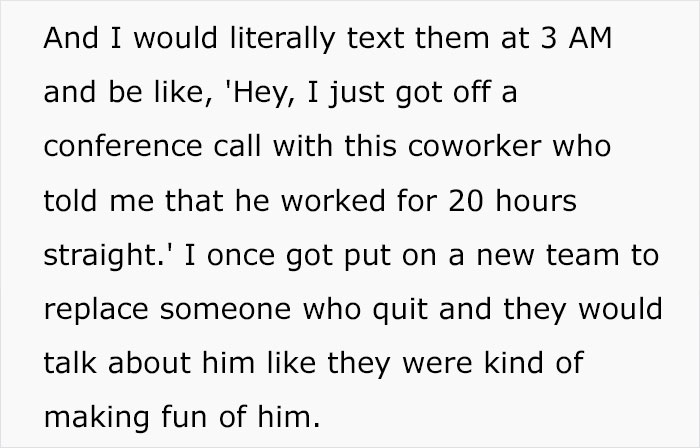 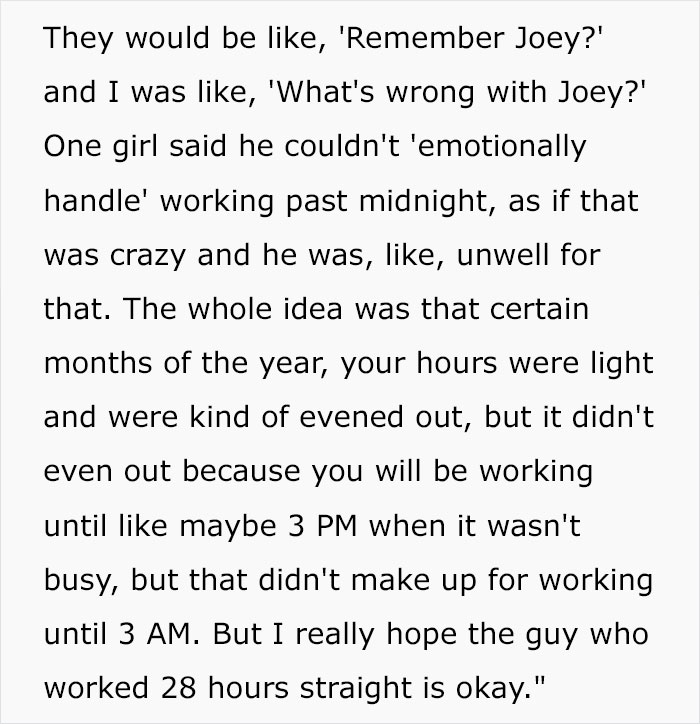 At the time of writing, Devin’s video had over 2.5 million views and nearly 227k likes. Meanwhile, her follow-up video about her former job got nearly 856k views and 33k likes. Overall, the TikToker has 117.5k followers and has amassed a jaw-dropping 8.4 million likes over all of her videos. Some TikTokers mentioned that Devin probably used to work at one of the ‘Big 4’ companies.

This is what people colloquially call the four largest accounting firms in the United States, and they are Deloitte, Ernst & Young (EY), PricewaterhouseCoopers (PwC), and Klynveld Peat Marwick Goerdeler (KPMG).

Devin’s video really got the TikTok community talking because many folks have had to deal with unfair working hours and incredibly invasive corporate systems at some point in their lives. Staying 15 minutes late to finish off a few work emails or eating instant noodles in front of your computer both seem tame in comparison to what Devin had to go through. But it’s always easier to give someone else the advice that we know we should be following as well.

It’s quite easy to recognize when someone else has issues with their work/life balance. It’s hella hard to see the same issues affecting our daily lives. What’s even more difficult is finding the courage to set firm boundaries and to say a firm ‘NO!’ when you’re forced to sacrifice your physical and mental health for someone else’s bottom line.

There are two factors to consider in situations like this. The first is financial. If you’re promised a solid wage and large bonuses for your trouble, it might be tough to resist working long hours. You might have a family to take care of. You might be saving up for a house or a wedding. Or you might consider that you’re only burning the candle at both ends for a few years, and then you’ll have enough money saved up to take it easy.

The other issue to keep in mind is social pressure. If your coworkers, managers, and bosses all work insanely long hours, it’s hard to resist doing the same. We’re social animals after all. We want to be respected and admired by our peers. Going against the group isn’t something that many people are comfortable with. Especially if we realize that if we begin going against the grain, we might need to find another employer.

However, as we’ve covered here on Bored Panda earlier, the fact of the matter is that each and every single one of us is responsible for communicating—and then enforcing—our boundaries when it comes to work. Nobody else is going to do it for us. It’s up to us to vocalize when enough is enough, and then act accordingly.

If there’s a massive issue at your company, you should consider meeting with your manager, boss, or HR (or, well, all of them) and address the current situation. Be friendly. Be diplomatic. But be firm. Present some possible solutions to the problem and focus on constructive criticism. That is, if you think that there’s still a possible future for you at the company.

Something that you have to be really open and honest with yourself about is whether you’d be willing to stick around at your company if the toxicity was solved. If it’s a ‘yes,’ then you’re investing your time and energy into trying to shift the work culture in a positive direction. However, if it’s a ‘no,’ then your resources might better be spent looking for a new job. Don’t feel like you’re ‘stuck’ at the job because of the pandemic or the global economic situation: there are always alternatives. And your life and dignity are worth more than asking for someone’s permission to shower at night. 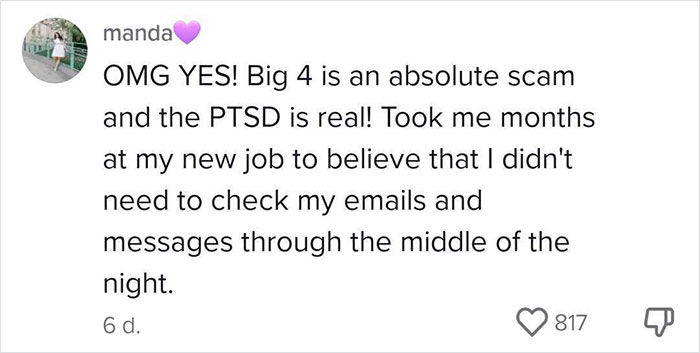 The post Team Meetings At 2 AM And Telling Colleagues When You’re In The Shower: Woman Spills The Tea About Her Toxic Corporate Job first appeared on Bored Panda.