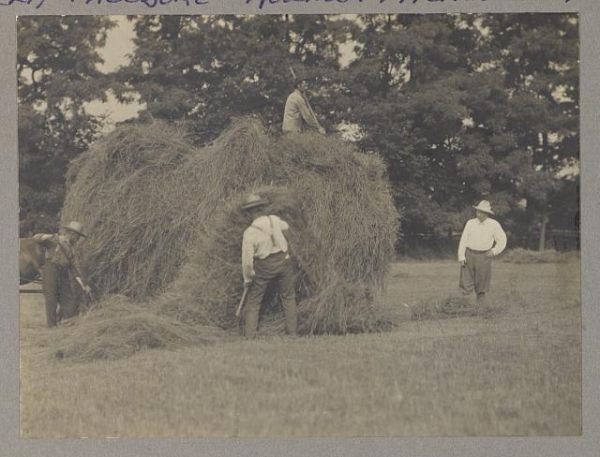 We know that President Theodore Roosevelt was a veteran, a fitness buff, and an outdoorsman. He always tried to stay in shape, and was no stranger to a hard day’s work, even while in office. Roosevelt camped outside, even when it rained, and was known to pitch hay with the best of them. This endeared him to working people, except for those he outworked in public. In fact, he managed to leverage his physical strength to influence others in many ways. In other words, he wasn’t above making hay out of it. This account quoted from a magazine was published in the Essex County Herald on November 22, 1907.

A delegation from Kansas visited President Roosevelt at Oyster Bay. The president met them with coat and collar off, mopping his brow.

“Ah, gentlemen,” he said, “dee-lighted to see you—dee-lighted! But I’m very busy putting in my hay just now. Come down to the barn with me, and we’ll talk things over while I work.”

Down to the barn hustled president and delegation.

Mr. Roosevelt seized a pitchfork and—but where was the hay?

“John!” shouted the president. “John! Where’s all the hay?”

“Sorry, sir,” came John’s voice from the loft, “but I ain’t had time to throw it back since you threw it up for yesterday’s delegation.”

Oops. The subterfuge is delicious, but it only underscores how fit the president was that he did that day after day. Read about Roosevelt’s adventures in hay, camping, and more at Second Glance History.  -via Strange Company