As the lead games curator for GameBender, a Scratch-based interactive gaming system, JT decides which of the more than 40 million Scratch-coded games, shows, and interactive experiences to feature on Scratch alumnus Jay Silver’s new entertainment platform. The GameBender console is as much for gaming as it is “glitching” the experience with custom code. Filters help you quickly hack changes like turning everything into marshmallows, adding pinball flippers, blasting flower cannons, and more. 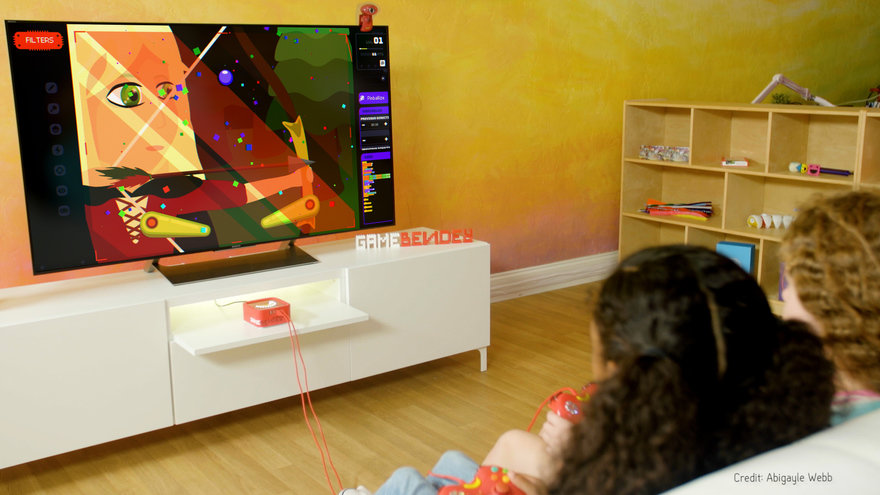 “I didn’t want to make a game console,” Silver says. “I didn’t want to teach people to code. This starts with asking, ‘How can people can feel inspired to learn things on their own accord?’ Sixteen-year-olds are the best Scratchers in the world. Take it or leave it. So I thought, ‘Wouldn’t it be cool if our system was made by teens and PhDs?'”

Silver was a precocious teen himself. He was named Engineer of the Year at Georgia Tech, went to Cambridge University on a Gates scholarship, and went on to be an NSF fellow and PhD researcher at MIT. But he became disillusioned with the corporatization and the military industrial complex he saw dominating engineering.

“I was actually ready to leave, then I went to MIT Media Lab and talked to Mitch Resnick,” the creator of the Scratch programming language. “He wasn’t trying to convince me to join his group or anything, he was just showing me how you can program in this new way, and I’m like, ‘Whoa, I’m in. Let me develop some stuff for you.'”

Silver spent the next seven years on the Scratch team, creating tutorials, advocating for more user-friendly side-on programming (instead of top-down), and making his own Scratch projects.

“I have a knack for getting people through to the first creative breakthrough, getting you to that first moment of interaction,” he says.

Silver’s side-on programming with photorealistic imagery, breakdancing, and hip hop helped people see Scratch coding in a new light—and get excited about building their own riffs with this easy-to-copy code.

Silver also discovered a knack for clearing roadblocks for newcomers. Running play tests for Scratch, Silver would see where young coders stumbled, and he’d try to add breadcrumbs that could help them find solutions to those problems a little faster.

“My process is to watch what the people are doing and make notes about how long it takes them to make their first basic creative contribution, something that they weren’t told to do. I look at how they recover from mistakes when something goes wrong, who they look to for help, whether they keep trying, and if they seem to feel bad about it.”

He went on to channel this special ability into his own project, Makey Makey. It’s a simple toolkit for turning everything from bananas to cats to glasses of water into physical interfaces—wire up any conductive material to the unconventional keyboard to create custom “keys,” and make the world around you an interactive part of your computer. 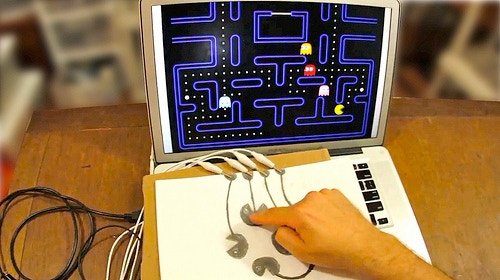 Makey Makey lets you turn just about any conductive object into a creative keyboard.

“I’m very serious about plug-and-play, closing that gap that everyone talks about between creating and consuming,” Silver says. “We take special care to really look at learning psychology and how creativity happens. How do these kinds of things transfer? Well, they transfer socially, through confidence. You don’t learn facts and now you’re creative. You sit in with other people being creative, and you gain experience, and you’re like, ‘Oh man, I really am this.'”

Silver and his cofounder Eric Rosenbaum wanted Makey Makey to be fun, but not too easy. “It came with the alligator clips and USB cables, but to make it work, you had to look around your house for things that are conductive,” Silver explains. “Building blocks can be a lens to teach that the world is re-formable.” Makey Makey’s Kickstarter campaign raised half a million dollars, and is now in MoMA’s permanent collection.

Silver’s next generation of game testing

Silver is using some of his standard play test trial-and-error tweaking on GameBender: He created “glitch” filters to speed up injections of custom code, is writing tutorials, and is working on a controller button that quickly pops open the hood of any game.

“We designed it for share-ability, low floor to entry, sociability. This is designed for kids to learn coding shoulder-to-shoulder, laughing in a safe space. It’s not on a small screen for only one person to see. Some people can learn that way—in fact, if you look at coders now, it’s mostly people who are good at learning things by themselves. Well, that’s not encompassing of everybody. How can you make things more collaborative, more passion-driven?”

Silver, conveniently, had already spent time in the Scratch community. So when he started asking himself those questions, he turned to the most collaborative, most active Scratchers—teens.

Bringing in the teens

JT discovered Scratch in a middle school coding class. He remembers his fascination with what was “basically a recreation of Minecraft on Scratch. You could actually see inside the projects, and how people coded them. Seeing it step by step was super cool.”

But what kept him engaged was the community. “There were people from all over the country, a bunch of different ages, and it was just amazing to be able to interact and share my creations and play other people’s creations.”

“He was onstage at an MIT Scratch conference, and he just has such prolific knowledge of everything going on in the Scratch community, because he kind of took on the role of a mentor at a pretty young age,” says Silver.

Now, JT sorts through Scratch’s 40 million projects to decide which will be most creative to play on GameBender. He looks for “glitchability,” projects that are fun to tweak with minor code interventions. “For an art game, that means you can change the color or look,” says JT. “On an action game, we have glitches that let you change the size of the character, or what enemy they are fighting, or things like that.” 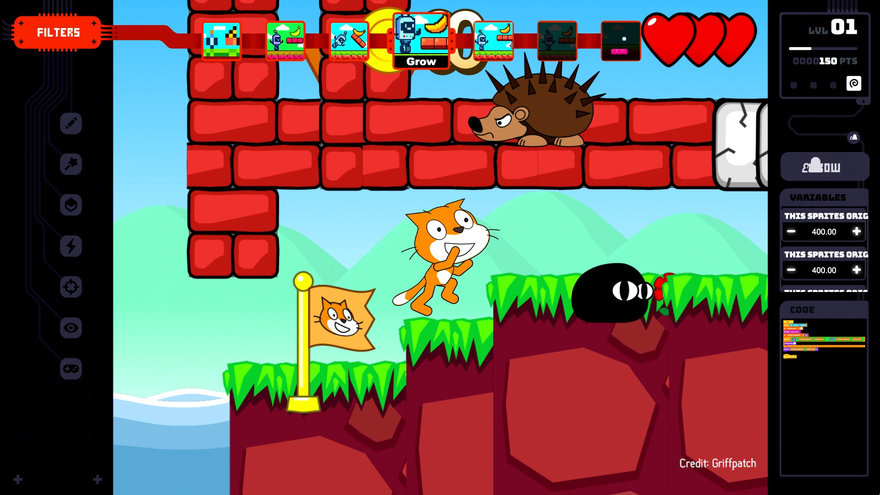 GameBender adds “glitch” filters, like “Grow,” shown here, to give gamers control of their experience—and learn about Scratch.

JT isn’t the only impressive teen in Scratch’s orbit. Silver also works with 20-year-old creative content designer Abi Web—”she’s super collaborative, really aware of what’s going on—she made this Massively Animated Projects Scratch project that included 12 other people.” And lead glitch developer Will Clayton has made 100 games—”all original and super interactive and fast, some real coding work,” says Silver. “When I wrote his college recommendation letter, I was like, ‘Hey, this is one of the best Scratch coders in the world.’

“It’s one thing to play test with teenagers. But when an engineer is building something, they’re actually constantly testing,” Silver says. “So when our 18-year-old developer Will has another idea for a new glitch, like a flower cannon, that idea isn’t just coming from an engineer, it’s coming from basically our user base. He shows this stuff to his friends as he’s making it, and if something’s not cool, he’s not going to let it fly.”

Silver has to go through some particular inconveniences to hire teens: They work as contractors, need time off when they have a big test, and get a lot more done during summer break. But it’s worth it. “People might think it’s something we’re doing to be cute, but no, these are the best professionals I could find. They don’t have a history of working professionally yet, but they are the world experts on what we’re doing with Scratch here. It’s important to have them helping us design for kids. Teens are the epitome of cool—they don’t know what can’t be done, instead they know how to feel what’s important in society, and they know things need to change.”

GameBender is live on Kickstarter through June 28th.

Rating Teens Do What They Want; These Ones Build GameBender with Jay Silver is 5.0 / 5 Votes: 4
Please wait...
Loading...
Related articles