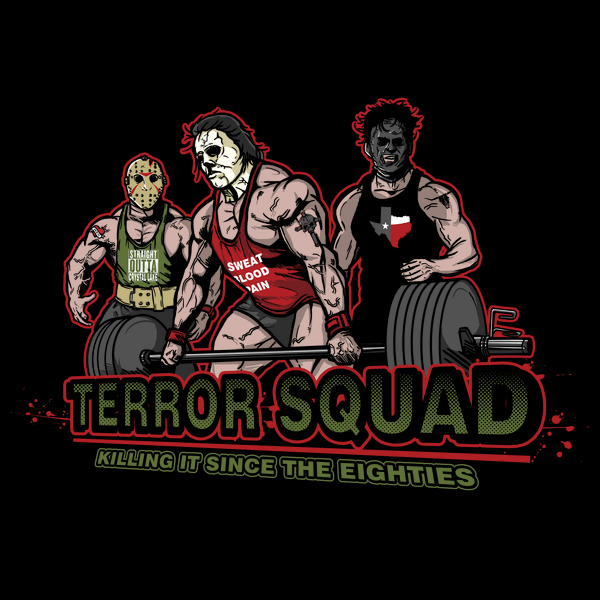 You may have found yourself wondering how the slasher stars of the horror genre stay in such good shape considering most of them are nothing but walking corpses. Well, their workout routine can be summed up in two words- dead lifts. They stay pumped by lifting the corpses of their victim, and Jason also swims in Crystal Lake and runs through the forests surrounding the camp so you know that boy is fit. Michael Myers may look like he moves real slow when he’s stalking his victim, but he’s just doing burst training, alternating between slow and fast bursts of power whether he’s sinking a knife into someone or catching up to his prey. And Leatherface not only lifts whole sides of long pork all day, he also attends a Chainsaw Step class that keeps him in prime shape, so his prey doesn’t slip away from him ever again…

Get pumped the psycho way with this Terror Squad t-shirt by AndreusD, it’s a horribly cool way to keep your gym gear fresh and make people grin like maniacs wherever you go!

Visit AndreusD’s Facebook fan page, Twitter and Tumblr, then head on over to his NeatoShop for more inspirationally geeky designs: