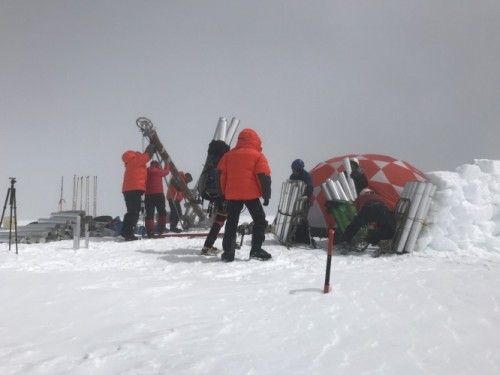 From the top of Huascarán, the highest mountain in Earth’s tropics, the western Andes valleys look peaceful and calming. From there, signs of climate change, such as the melting glaciers in the Andes, and the changes in the water supplies of the local villages, are not immediately evident. Scientists, however, are aware that these signs do exist, and they know that they are there.

It’s part of why they’ve traveled so far, from the United States, Mexico, Italy, Peru, France and Russia, and tackled this harrowing climb to more than 22,000 feet: to visit the glaciers at the top and to drill columns of glacier ice to send back to The Ohio State University for analysis. The ice holds many clues to what has happened in Earth’s atmosphere and in the climate of the region over the last 20,000 years. And, if Earth keeps warming, the glacier might not be there for much longer.

Huascarán is a peak in the Cordillera Blanca range in northern Peru. Thompson has been here before, in 1980, 1992, 1993, 2016, and in the summer of 2019 he led a group of scientists back to see how the glacier had changed and to collect new ice samples.

Because of its altitude, Huascarán is one of the more challenging and dangerous peaks on which Thompson and his crew have drilled. But that altitude also protects the ice. Currently glaciers at lower altitudes, where it is warmer, are melting rapidly and Huascarán’s glacier will eventually melt, too, but for now, it is likely one of the few remaining intact tropical glaciers in the world.

More details about this over at Ohio State News.