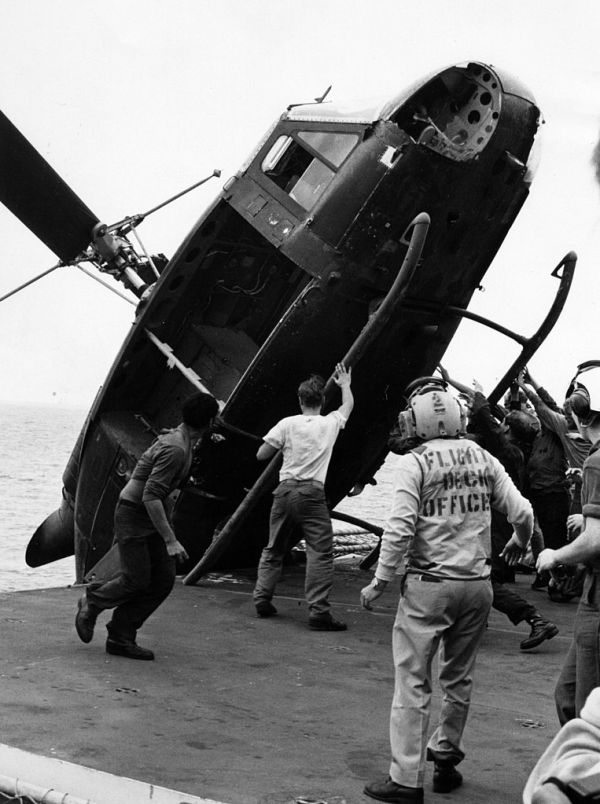 When the outcome of the Vietnam War became obvious, the US began evacuating South Vietnamese people who were in danger of retaliation from the advancing Communists. In the last few months of the war, 50,000 people loaded onto supply ships and planes to escape, but a planned evacuation of two million people was not to be. The American ambassador to South Vietnam, Graham Martin, refused to authorize a mass evacuation because he did not want to publicly admit the war was lost until the final hours before Saigon fell. By April of 1975, the only way to get people out was by helicopter. The process was called Operation Frequent Wind, and involved airlifting Americans and Vietnamese from the roof of the American embassy by helicopter.

Leaving the evacuations as late as Martin did understandably resulted in mass panic across Saigon with many thousands of South Vietnamese citizens fleeing in everything from cars to stolen planes and helicopters.

In addition, lack of time meant that helicopter pilots had a laughable number of people to rescue, resulting in many ignoring the “recommended” weight limit of their craft and massively overloading them to the very extremes of what they could handle given the pilot’s assessments and weather conditions. In one case, one pilot noted he was overweight to the point that he could only hover inches off the ground, but no one was willing to get off as for many it would mean their life if they could not get out of the country.

He then stated he thought if he could get some forward speed he could get the additional lift needed, so simply pitched the craft forward and took a dive off the rooftop he was on, barely recovering before hitting the rooftops below and then managing to very slowly climb from there.

As for these pilots, they were instructed to ferry evacuees to waiting ships in the South China Sea, many of which quickly began to run out of space resulting in people sleeping double in the small bunks, as well as just anywhere on the ships there was available space for someone to sit or lie down on.

That leads us to the story of Major Buang Lee, who commandeered a small plane to take his wife and five children to safety. Read of his amazing landing at Today I Found Out.

Rating That Time Marines Dumped Millions of Dollars of Helicopters Into the Ocean to Save One Family is 5.0 / 5 Votes: 1
Please wait...
Loading...
Related articles