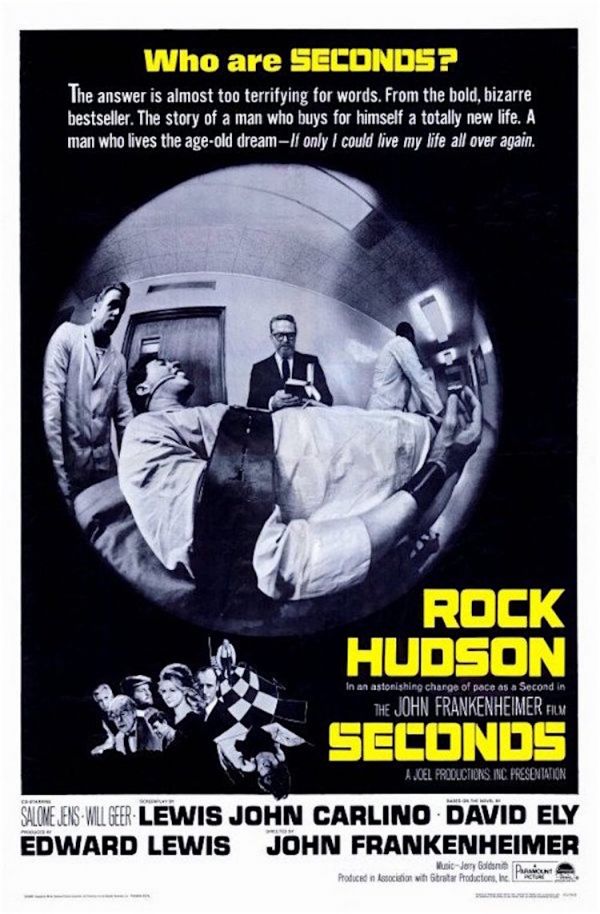 Rock Hudson had a few serious dramatic roles early in his career, like Giant and Written in the Wind, but he was soon typecast into romantic comedies and lightweight roles that brought in a lot of money in the 1950s and ’60s, but little prestige. Hudson wanted more serious roles, so he fired his longtime agent and followed an opportunity to star in the 1966 science fiction movie Seconds. The plot of Seconds involved a man (named Wilson in the book, Hamilton in the film) who gets the chance to live a different life when a mysterious organization offers to give him a new face and identity. The film was to be directed by John Frankenheimer, a young Hollywood hotshot who had a string of hits to his name.

Frankenheimer thought the only actor who could play the before and after roles of Hamilton/Wilson was Laurence Olivier. He hopped on a plane to England and got the theatrical knight to agree to the role. But this wasn’t what Paramount wanted. They wanted a BIG NAME. A BIG BOX-OFFICE NAME that would bring as wide and as varied an audience to the movie as possible and therefore lotsa money. Through a friend-of-a-friend-of-a-friend, Rock Hudson was suggested as a possible lead to Frankenheimer.  The director couldn’t see it but agreed to meet with the actor.

Hudson wanted the part but he knew his limitations. He suggested to Frankenheimer that two actors should play the before and after roles rather than just one. It was a clever idea—one Frankenheimer thought would work. Hudson inferred he wanted the role because he knew exactly what it was like to be Hamilton/Wilson. Here was an actor who been forced to hide his true feelings since childhood and had had a whole new (fake) identity as America’s red-blooded hetero-beefcake foisted on him by movie studios. All because he wanted to have the one career he had always dreamed about.

Unfortunately, Seconds turned out to be a well-crafted box office flop, Frankenheimer’s first. Hudson was so disappointed that he gave up on pursuing dramatic roles in prestige films and settled for the lighter fare he was known for. The story behind the making of Secondsis a fascinating read at Dangerous Minds.