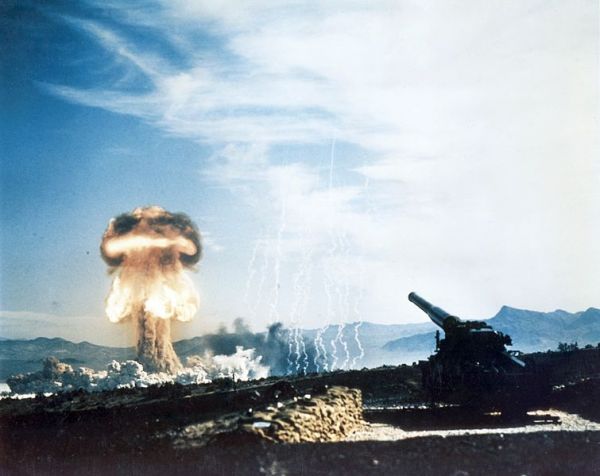 In 1945, we delivered nuclear bombs by plane. Today, a nuclear arsenal contains ICBMs to deliver nuclear destruction by rocket. In between, one idea for nuclear firepower was to shoot it from a cannon. Engineer Robert M. Schwartz designed the ammunition in 1949, huge 280mm shells with a nuclear tip. Then he had to design a cannon capable of firing them.The result was the M65.

…to say the M65 was cumbersome is a massive understatement. Weighing around 83 tons tons, it was rather difficult to move, requiring two trucks packing 375 horsepower engines, one truck on each end of the cannon, with the drivers needing to be in constant communication as they drove. The top speed on this setup was a breakneck 35 mph, if the road was straight and reasonably flat.

Its mobility was also limited by the length of the vehicle- about 80 feet- with one soldier, Jim Michalko, recalling that after getting the cannon stuck in a narrow street during transport in Germany, they ended up having to destroy several buildings in order to make necessary turns.

Despite these issues, a well-trained crew of around 5 people could have the cannon ready to fire in around 15 minutes, with the weapon capable of hitting any target within roughly 20 miles with pinpoint accuracy. It likewise only took around 15 minutes to get the cannon back on the road, ready to nuke another target.

The M65 was only fired once, but the resulting film was enough of deterrent to last until better weapons were developed. Read about the M65 at Today I Found Out.

Rating That Time the US Military Made an Atomic Cannon is 5.0 / 5 Votes: 5
Please wait...
Loading...
Related articles