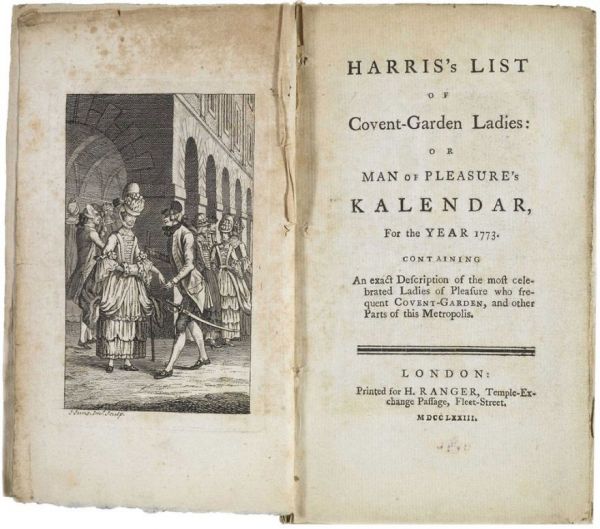 To find a great restaurant in a faraway city, you’d turn to a travel guide. Before buying a car, you might check out J.D. Power. But if you wanted to find a good prostitute in 18th-century London, there was no better guide than Harris’s List of Covent Garden Ladies. The guide was published anonymously and annually from 1757 to 1795. The women were listed by name with a laughable attempt at disguise by deleting the vowels, along with addresses and prices.

Harris’s List was a sort of essential read for any gentlemen visiting London for pleasure, and many sought it out for this exact purpose. One copy acquired by Wellcome Library had crosses and house numbers scribbled in the margins in pencil suggesting the book was really used, and “not just flicked through for vicarious pleasure in an armchair.”

Indeed, Harris’s List served as much to guide as to titillate. The physical appearances and the sexual prowess of the women were described in such explicit detail that some historians suspect the book was entirely fiction and was supposed to be read as erotica. Others feel that the book was authentic, and although the names of the ladies throughout the book were disguised by replacing letters with dashes, these were real people at real addresses.

If a particular lady had serviced a famous man, the book was sure to mention it.

Historians have some idea as to who may have been behind the guide. Read what we know about Harris’s List, including some floridly explicit excerpts, at Amusing Planet.  -via Strange Company