To help take the Green New Deal from abstract legislative goals to reality, the University of Pennsylvania’s Ian L. McHarg Center for Urbanism and Ecology launched The 2100 Project late last year. Culled together from the Center’s far-reaching research, the first part of the project is titled “An Atlas for the Green New Deal” and consists of more than 100 visualizations unpacking the intersecting issues that define our time: a changing climate, population growth, and an economic dependence on extraction, production, and consumption. Their work started with mapping the spatial impacts of these factors over the next century in the conterminous United States but hopes to expand and include other areas of the world in future additions to the project. 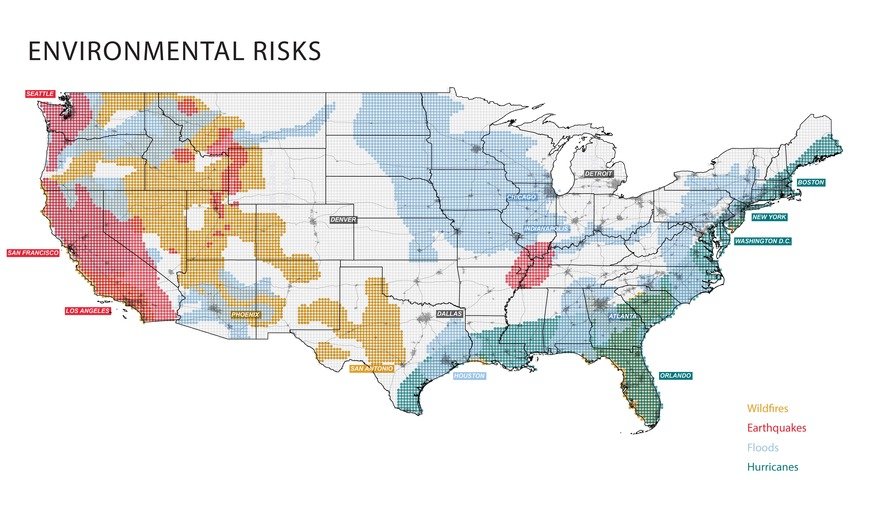 “The Green New Deal does not pretend to have all the answers, but it’s a bold and necessary start. Because it connects social change with environmental change, and because it recalls the ambitious spirit of the original New Deal, the Green New Deal is the only set of ideas on the table that are scaled to the challenges we face,” the project write-up explains.

“But right now, the Green New Deal is embryonic, represented only in the most abstract set of goals outlined in H.R. 109. Its outline of a sustainable future needs to be filled in. It needs to be developed, debated and designed. To that end, this Atlas for a Green New Deal brings together a vast and disparate array of information in the form of maps and datascapes; tools to help us understand the spatial consequences of climate change—not so that we may be frightened by them, but so that we may be mobilized around a response to them.”

The platform includes detailed maps tracing projected migration patterns, coastal losses, the impact of the meat production industry, solar and wind power potential, and much more. Freely accessible online, the platform is a valuable tool for legislators, planners, designers, and anyone trying to get a better grasp on the consequences of climate change. Dive into the research here.

Rating The 2100 Project Maps the Impact of Climate Change Across the Country is 5.0 / 5 Votes: 2
Please wait...
Loading...
Related articles

“Luminessenza” by Crisa in Sardinia, Italy

From DIY to Off-the-Shelf to Custom-Made: The Rise of the Sneeze Guard

After This Elderly Woman With Respiratory Problems Had To Self-Isolate, Her Neighbor’s Dog Started To Deliver Groceries To Her