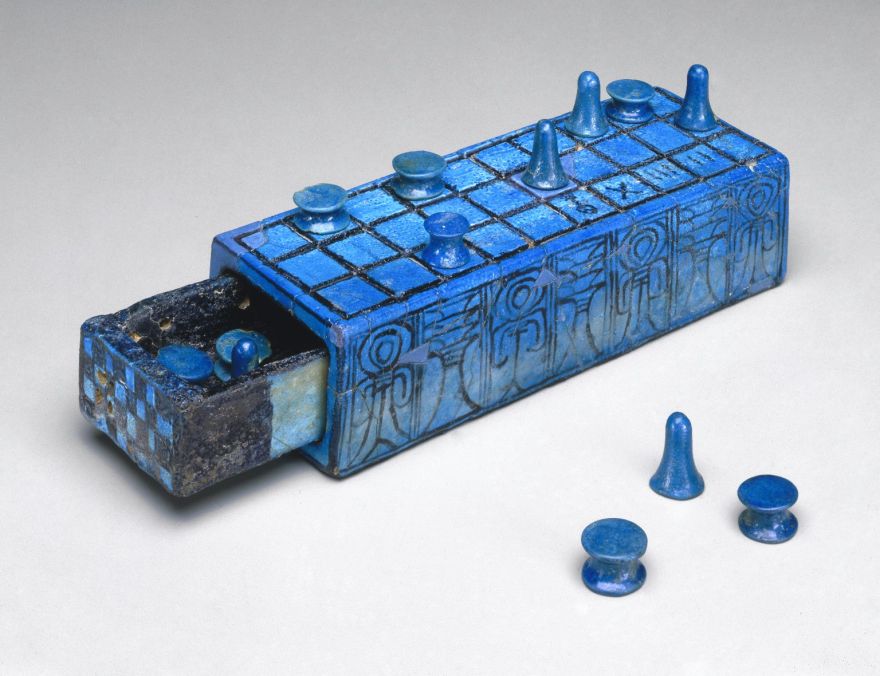 Now you can learn how to play the game. Meet the Egyptian Senet, one of the most popular board games of the ancient world. Senet is a game with deep links to the afterlife, played on a board that represents the underworld. The game was featured in tombs, showing the dead playing against friends and family. Senet was loved by Egyptian royals, as Open Culture details:

“Beloved by such luminaries as the boy pharaohTutankhamun and QueenNefertari, wife of Ramesses II,” Meilan Solly notes atSmithsonian, Senet was played on “ornate game boards,examples of which still survive today.” (Four boards were found in Tut’s tomb.) “Those with fewer resources at their disposal made do with grids scratched on stone surfaces, tables or the floor.” As the game became a tool for glimpsing one’s fate, its last five spaces acquired hieroglyphics symbolizing “special playing circumstances. Pieces that landed in square 27’s ‘waters of chaos,’ for example, were sent all the way back to square 15 — or removed from the board entirely,” sort of like hitting the wrong square in Chutes and Ladders.

Senet gameplay was complicated. “Two players determined their moves by throwing casting sticks or bones,” notes the Met. The object was to get all of one’s pieces across square 30 — each move represented an obstacle to the afterlife, trials Egyptians believed the dead had to endure and pass or fail (the game’s name itself means “passing”). “Because of this connection, senet was not just a game; it was also a symbol for the struggle to obtain immortality, or endless life,” as well as a means of understanding what might get in the way of that goal.