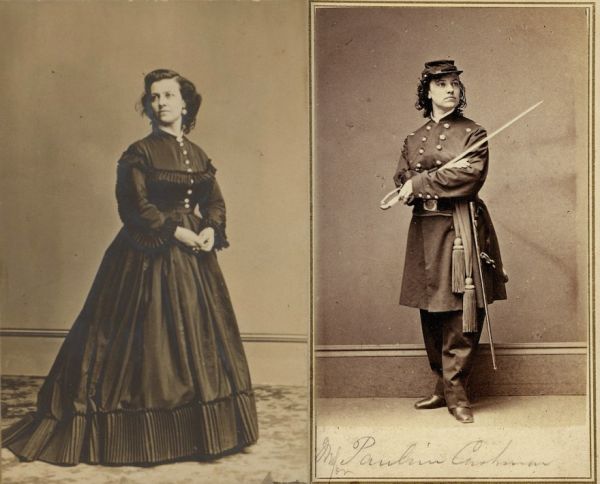 Pauline Cushman went to New York City to become an actress. After her husband died in the Civil War in 1862, she found work at Wood’s Theater in Louisville, Kentucky. That’s where she became a spy for the Union Army.

As the legend goes, Cushman was set to perform a scene in the play The Seven Sisters in which she proposes a toast. Two rebel officers, Colonel Spear and Captain J. H. Blincoe, offered her money to drink to the Southern Confederacy. After confessing this dare to Union authorities, she was directed to take the bet in order to ingratiate herself with Southern sympathizers and feed information back to the Union.

On the night of her performance, Cushman raised her glass and shouted, “Here’s to Jefferson Davis and the Southern Confederacy. May the South always maintain her honor and her rights!” The audience fell silent, before chaos ensued and Cushman was swiftly fired from the production.

What Cushman lost in roles she gained in Southern approval. According to the 1865 biography, Cushman was embraced by Confederate circles and began spying for the Union, with storied escapades like wearing men’s clothing to intermingle with rebels. One account even reports that she discovered her landlady mixing poison in the coffee of wounded Union soldiers and had her arrested.

After the war, Cushman resumed her acting career and was regarded as a star that burned even brighter because of her wartime heroics. You’ll find more of Cushman’s story, including some of her exploits as a spy, in an article about the current exhibit called Storied Women of the Civil War Era at the National Portrait Gallery. You’ll also get a glimpse at some of the other fascinating women featured in the exhibit at Smithsonian.

Rating The Actress Who Left the Stage to Become a Civil War Spy is 5.0 / 5 Votes: 2
Please wait...
Loading...
Related articles