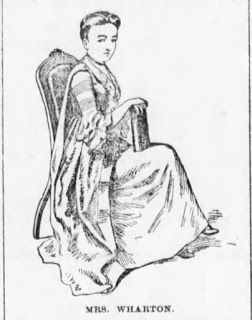 Elizabeth “Ellen” Nugent Wharton was a prominent member of Baltimore’s high society in the 19th century. She had married well, raised two children, and for all anyone knew, was quite wealthy.

Sadly, her personal life had more than its share of tragedies. In the late 1860s, her husband, Major Henry Wharton, died suddenly and mysteriously. Not long afterward, her only son, Harry, joined his father in the grave, leaving Mrs. Wharton with no consolation except the large life insurance policies she had taken out on her unfortunate menfolk. When her brother-in-law Edward Wharton and his daughter also passed away during a visit to her home, her friends greatly sympathized with poor Elizabeth. Mrs. Wharton’s only remaining close family member was her daughter, Nellie. Nellie Wharton’s health also took a dramatic downturn during this period, but fortunately, she survived.

In late June 1871, an old friend, Eugene Van Ness, paid her a friendly social visit. Van Ness, a bookkeeper, kept the records of Mrs. Wharton’s accounts at the banking firm of Alexander Brown & Sons. On June 28, another of Mrs. Wharton’s friends, General William Scott Ketchum, also came to spend the weekend at her home. The object of his visit was not just pleasure, but business. Some time back, the General had loaned Mrs. Wharton $2,600. He wanted the loan repaid before she set out on a voyage to Europe which was scheduled for the following week.

You can see where this is going. Both men fell ill, but Van Ness recovered. The general survived the weekend, but he never left Mrs. Wharton’s home alive. Suspicion fell on Mrs. Wharton, and previously-unknown stories about her earlier life came to light. Read about Elizabeth Wharton and her unsavory habits at Strange Company.

In Baltimore, Generations Traces a Lineage of Abstraction Among Black Artists