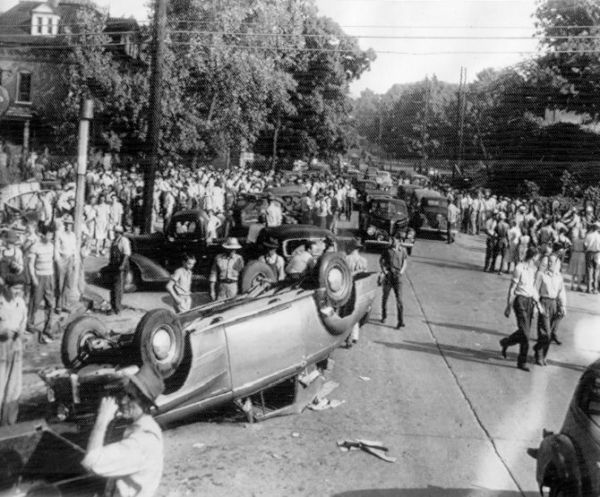 Here’s a tale of small town government corruption that makes Walking Tall look like a Disney movie. During the 1930s and ’40s, McMinn County, Tennessee, was the personal fiefdom of Paul Cantrell, who was the county sheriff, then Chairman of the County Court, and then a state senator -along with some other positions he was paid for simultaneously. Cantrell installed his cronies in other offices, and ran the county with an iron hand. Elections were rigged, everyday citizens were shaken down for money, and bootlegging, gambling, and prostitution flourished as long as it was profitable for the political machine. When World War II ended, hundreds of young local men who had been gone for years fighting fascism came home and did not like what they saw. After getting a taste of the local machine’s power when Navy Seabee Earl Ford was murdered, the veterans organized and launched a slate of candidates for the county election of 1946 under the non-partisan “Ex-Serviceman’s Cleanup Ticket for McMinn County.” Their path would not be easy. Paul Cantrell himself was running for sheriff again, and his successor Sheriff Pat Mansfield ran for state senator.

Election Day had finally arrived. A local minister exhorted his congregation thus: “If you do not vote as your conscience dictates, then you have sold your citizenship and do not deserve to be citizens. It is the responsibility of each and every person to preserve our most cherished possession, liberty, or forever lose it.” Armed deputies “guarded” each polling place, and reports of election fraud poured in to GI headquarters almost immediately. One veteran lamented, “They already started knocking our boys in the head and putting them in jail. They’re taking this thing…This thing’ lost.” Bill White would have none of that, replying, “Now…this thing’s just getting started.” White was right; indeed, it would not be long before the machine drew first blood.

At one polling place, a deputy beat and shot a sixty-year-old whose only crime had been his surplus of gumption in exercising his right to vote. Meanwhile, another deputy delivered a brutal beating to a GI election judge after he protested the brazen voter fraud happening before his eyes; the deputy tried to draw his gun, and likely would have killed the veteran, but it snagged in his holster. When he had exhausted himself, he had the man dragged to the jail bloody and insensate. By this time, DeRose notes, “there were twelve ballot boxes: one in the jail, another inside a heavily defended courthouse, a third barricaded in the Dixie Café, a fourth in the vault in the Cantrell Bank Building, and poll watchers had been ejected at two other locations.” Inside the courthouse, deputies held a handful of GI poll watchers hostage, two of them wounded.

However, those hostage GIs were tougher than they were before they went off to war. And the rest of the veterans had developed skills with guns, explosives, and even airplanes. Read about the Battle of Athens in a gripping account at The Abbeville Blog. Oh yeah, and when the smoke cleared, there were election results. -Thanks WTM!

I Cooked A Chicken By Slapping It