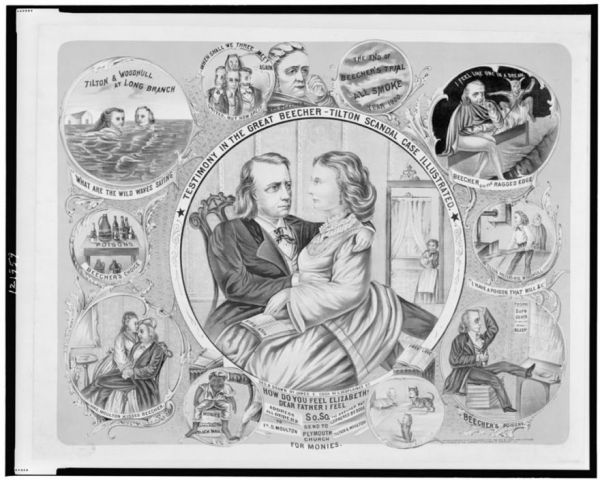 Henry Ward Beecher was the pastor of the Plymouth Church in Brooklyn and a leading abolitionist in the mid-19th century (and the brother of author Harriet Beecher Stowe). He was also widely rumored to have led numerous affairs with the women of his church. Most famous was his relationship with Elizabeth Tilton, the wife of his friend and assistant, Theodore Tilton. Theodore Tilton found out about it in 1870.

Despite the devastating revelation, Elizabeth, Theodore, and Henry decided to keep the affair private. They had several good reason to do so. It protected Tilton’s pride, avoided moral censure of Elizabeth, and preserved Henry’s good name. Nonetheless, their pact did not last because Elizabeth confessed the affair to her friend Paulina Wright Davis, who then told three people: women’s rights activist Susan B. Anthony, Henry’s younger half-sister Isabella Beecher Hooker, and the leader of the women’s rights movement Elizabeth Cady Stanton, who had also already heard about the affair from Theodore.

As word spread and some of the more influential parishioners within the Plymouth Church congregation learned of the affair. Henry became concerned and prompted Elizabeth to retract her confession. When she did Theodore became upset and demanded that his wife retract her retraction, which she did the same evening. Still, everyone thought news of the affair would go no further. However, that was not the case because Stanton repeated the story.

Another women’s rights leader, Victoria Woodhull, heard it. She was a proponent of free love, a social movement whose goal was to separate the state from sexual matters and the idea of free love.

Woodhull did not disapprove of the affair, but was offended by Beecher’s hypocrisy in that he preached against her philosophy of free love. When Woodhull published news of the affair in her newspaper, it lit the fuse of a widely-publicized and salacious scandal. There was a criminal trial, a church investigation, an excommunication, and a lawsuit. But Beecher was not the one who suffered. Rather, it was Victoria Woodhull and Theodore Tilton who paid the price for the affair. Read the whole story of the Beecher-Tilton scandal at Geri Walton’s blog. -via Strange Company