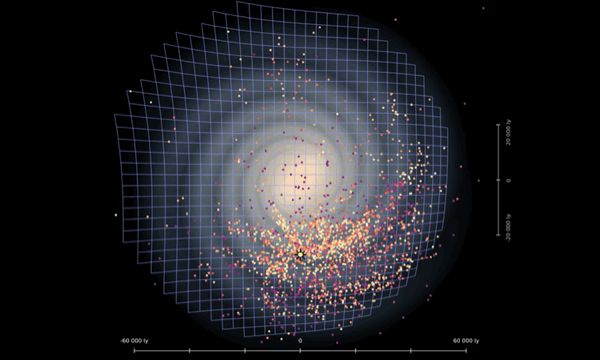 Most of our science textbooks up to this day teach that our galaxy the Milky Way resembles a flat spiral. However, this new detailed 3-D map of our galaxy says otherwise. It turns out that our galaxy is warped.

Getting an actual look at our own galaxy is basically impossible. So far, our most distant space probes have barely left our own solar system and will likely never leave the galaxy to capture an image from a distance. So astronomers have to rely on modeling to figure things out using the telescopes and instruments we have. That’s difficult because Earth is parked in a small spiral arm about 26,000 from the galactic center, making it hard to take in the big picture.

Elizabeth Gibney at Nature reports that prior to this study, the best maps of the Milky Way, which is about 120,000 light years in diameter, used indirect measurements, like counting stars and extrapolating information from other nearby spiral galaxies that we can see. But for this study, researchers from the University of Warsaw used the Optical Gravitational Lensing Experiment telescope at Las Campanas Observatory in Chile to analyze the Cepheids, a group of stars that brighten and dim on a predictable cycle, directly measuring their distances.

Over the course of six years, the team catalogued 2,341 Cepheids stretching across the galaxy, taking 206,726 images of the stars. Observing stars from Earth, it’s sometimes hard to know how bright they really are. A super-bright star that is very far away may appear dim. But researchers know that the slower a Cepheid star pulses, the brighter it really is, which allows them to calculate its true, or intrinsic, brightness. By comparing the brightness level of the star with its apparent brightness from Earth, the researchers were able to determine the distance and three-dimensional position of each Cepheid with more than 95 percent accuracy. Using these data points, they plotted the positon of the Cepheids throughout the galaxy, creating a structural map. The study appears in the journal Science.

More of this topic over at Smithsonian.com.

It looks like a Pringle to me. What do you think?