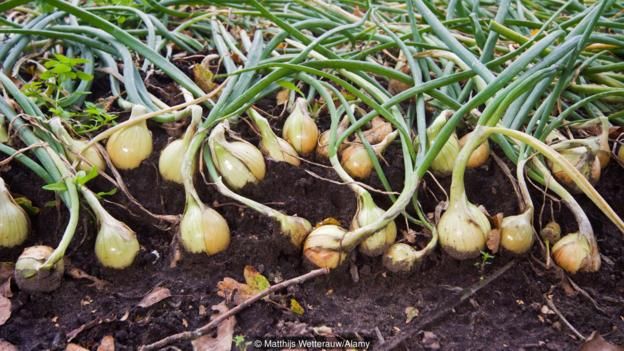 Cheryl Rogowski’s parcel of land in Pine Island, New York is down a steep slope that opens up into a wide view of the valley. The crops of this season are lettuce, epazote, cabbage, squash, cucumber, tomato, peppers, sunflowers and gladiolas — all of them reflecting Rogowski’s love for color.

Rogowski is no stranger to Pine Island, a land known as the “Black Dirt Region” or “The Drowned Lands” because of its dark and damp soil, which locals call “muck”.

She’s always experimented with the land. In the 1980s, soon after her father gifted her five acres to farm for herself, she started planting jalapenos. “You can’t grow jalapenos in the north-east,” some were quick to warn. This was when it was rare to see a jalapeno in the local supermarkets. But it worked, and at one time her farm had more than 1,000 varieties of chillies.

But her thousand varieties of chillies were not the ones that transformed the landscape. It was the onions. But what’s the difference between a regular onion and this one?

The high sulphur content of the soil from thousands of years of composted vegetation ups the pyruvic acid levels in the onions, which, in turn, increases the sugar content, resulting in a bold, pungent taste. This makes the Pine Island onion exceptional for cooking. When caramelised, they become uniquely sweet.

“The flavours are brighter, sharper, cleaner,” Rogowski said. She makes a smoked onion jam that she claims won’t taste the same with any other onions.

Know more about the land and its onions over at BBC.