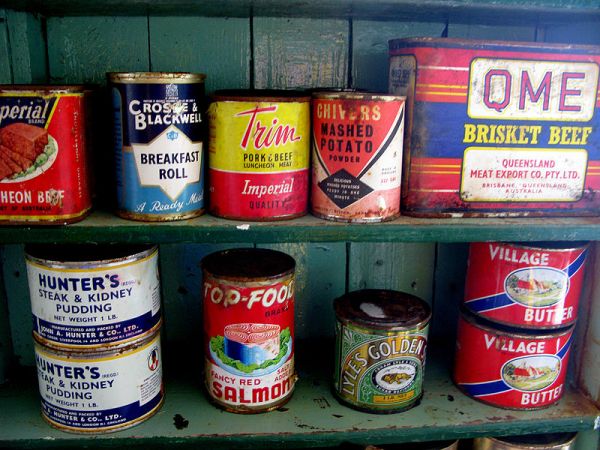 The evolution of a food preservation makes one wonder about the failures that came along with experimentation. How many people had to die before we figured out the perfect way to cure a ham? And so it was with canned foods, which were invented in France in the early 19th century, but weren’t common in the US until after the Civil War. People didn’t quite trust the process, with good reason. However, it turns out that humans have evolved to deal with spoiled food, for the most part.

Most canned food spoilage is fairly obvious—either the can itself becomes deformed or its contents are visibly spoiled—and relatively harmless, perhaps leading to digestive upset or mild illness. But there was one rare kind of bacteria that was far from harmless: Clostridium botulinum.

This bacteria produces botulinum, the deadliest toxin known to humankind, which can’t be detected by sight, smell, or taste. Botulism doesn’t itself cause cans to be externally deformed, neither dented nor bulging, but those external signs often suggest an insufficient canning process, which can breed both botulism and other kinds of bacteria that have more visible effects. Botulism is also anaerobic, meaning it thrives in oxygen-free environments, precisely like that of canned food. Though it was rare, botulism terrified canners.

Dead consumers tend to dampen the market, so canners not only welcomed regulation by the government, they were quite strict about self-regulation, too. As the industry developed, they worked hard to avoid botulism outbreaks like the one that killed 18 people in 1919. Read about that, along with the history of canned food, at Smithsonian.

Beyoncé’s Black is King, a Black American Vision of the African Continent

This Is Visual Escapism

The New Apple iMac Is a WFH Powerhouse