A brand new photo series by Massachusetts-based photographer Pelle Cass (previously featured here). Building from his ongoing collection of time-lapse compositions, “Crowded Fields” sees Cass focusing on a single subject for the first time. Drawn to sports not only because of his own love for them but due to the feeling of chaos and a slightly mischievous desire to mess with the very rules and constraints he so admires, Cass’s latest body of work flips the entire spectacle of sporting events on its head. As he shared with us about the project:

“I avoid the narrative of a particular game or event. In fact, I radically reorder the sequence so that, in sporting terms, my pictures are nonsense… It also pleases me that the relationship between audience and event is flipped: the crowds in my pictures are on the field and the stands are nearly empty.”

While the series could be seen as offering a subtle critique of the rigid militarization of the games or colleges’ prioritization of their teams success on the field (as opposed to in the classroom), Cass isn’t one to make such proscriptions. If anything, his real passion seems to be his process. Following roughly the same rules he established for himself early on, Cass’s first is literally “change nothing”:

“My one rule is to change nothing, just add and subtract. I also don’t crop, which was maybe the first rule of photography I learned in art school. Throughout the ten years I’ve been doing the two related series, I’ve stuck to those rules.”

Of course, he has made some changes. For example, allowing himself to repeat figures which he initially resisted as being “too tricky.” Although they still never appear sequentially, “Crowded Fields” relies heavily on repeated figures. Similarly, as Cass reflects, this latest project marks more than just a shift in focus:

“In the past, I wasn’t interested very much in setting or landscape. As I looked for sporting events to photograph, I was also drawn to the spaces–stadiums, arenas, fields, pools. I think that the emphasis on the body and setting has made my work tip towards emotion and a little away from the intellectual concerns of time, coincidence, attention, conformity that was my main interest in ‘Selected People.’”

See more images from “Crowded Fields” below, as well as a few bonus images of the photographer himself, taken during his Ten Thousand Selfies project. An iteration of the trend of taking a picture a day to show the effects of time, like Karl Baden’s 30-plus years of self-portraits amounting to roughly 10,000 images for “Every Day,” Cass shows the effect of time in 10,000 pictures, only taken over the course of a single day from 7 a.m. to 7 p.m. 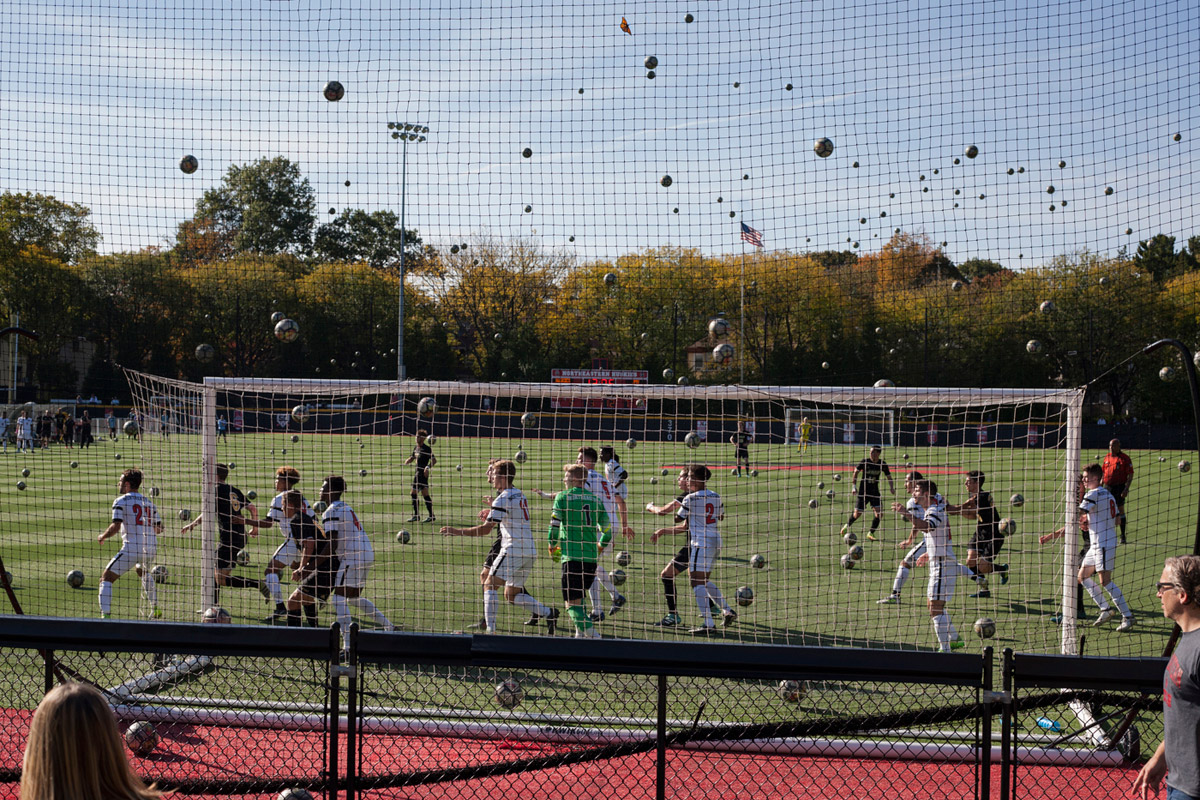