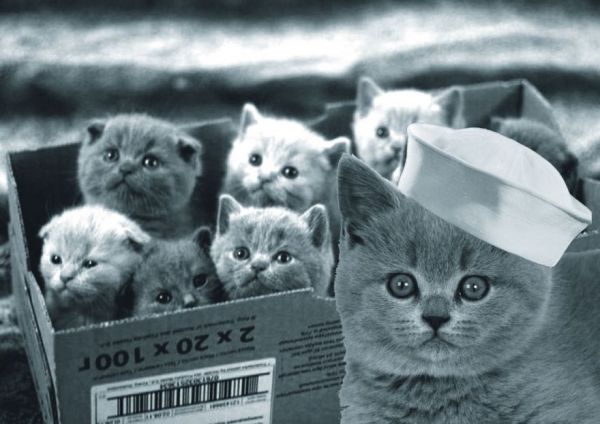 The steamship Iron Monarch had a ship’s cat whose name was not recorded, but her feats of reproduction were. While the crew might have just called her “Pussy,” they held the cat in high regard. In October of 1925, the ship was carrying a load of coal and facing gale force winds and crashing waves during a storm. The crew was busy holding things together.

And then through the spume that made its way from length to breadth of the ship, biting and lashing the faces of those who were “only doing their duty,” there was heard a thin, small voice, which asked in beseeching tones, “Oh, where is our poor old cat?”

And over the face of each seaman – men inured to hardship and rough life; mariners who have voyaged the seven seas of the world – came a pallor only associated with death or with some great mental upheaval. As one man, they rushed through the seething waters to all parts of the ship, jeopardizing their own lives (even, the cook left his galley) in the search for pussy.

They eventually found her, with nine new kittens born during the storm. That brought her lifetime record up to 62 kittens. If you got a smile out of that story, you’ll want to read more tales of ship’s cats at Seafurrers. -via Strange Company