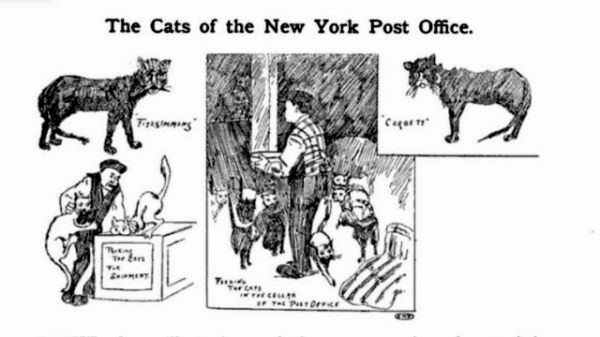 At the turn of the 20th century, the New York Post Office employed dozens of cats, which had the duty to control the rodent population, and in return received one meal a day from George Cook. Cook, who had brought the first cat to the post office, was allocated $5 a month in federal funds -from taxpayers- to provide for the cats. He thought the compensation was a bit stingy, but a well-fed cat doesn’t hunt rats as well as a hungry cat.

The basement offered numerous patrol and napping posts for the cats, including 700 closets where the employees stored their street clothes and a large storage area for all the U.S. mail bags not in use. Each patrol cat had a favorite spot to sit for hours and wait for a rat to pass by.

Hard-working cats that went above and beyond the call of duty could be promoted to the Registry Division on the top floor of the building. Registered mail required extra care to safeguard it, and all persons handling this mail had to account for it as it passed through their hands along its route. The postal cats had to be extra diligent in their rat-catching efforts to protect this valuable class of mail.

George said he used what he called “a two-platoon system” in order to ensure there were always enough cats on duty at one time to catch the rats and mice. He said he set up this system one day when he didn’t have enough cats on reserve to handle a massive rat attack. Apparently a cheese house had mailed samples of its most powerful Limburger cheese, and the mail bags were attacked by the rats. A riot ensued, and there were not enough cats on duty to arrest all of the perpetrators.

The population of postal cats waxed as they attracted other cats and had kittens. It waned as the SPCA conducted occasional raids to carry excess cats off for euthanasia. By 1910, there were around 200 cats on the USPS payroll. Read about the postal cats and their various shenanigans at The Hatching Cat.