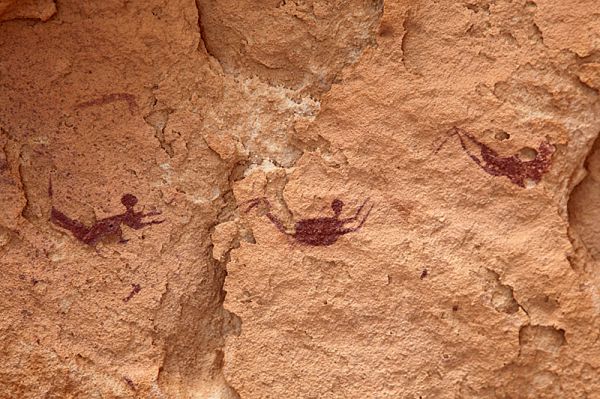 Hungarian explorer László Almásy explored the Sahara desert in Egypt and Libya, trying to find a legendary oasis called Zerzura. In 1933, he found a cave in Egypt’s Gilf Kebir mountains that had paintings of people on the walls. The figures are estimated to be 8,000 years old. They appear to be swimming, but that was impossible in the Sahara Desert!

László Almásy, in his book The Unknown Sahara, postulates that the swimming scenes are real depictions of life at the time of painting, suggesting that there had been a climatic change from temperate to desert. At that time it was a radical new theory that sounded so dubious that his publisher felt compelled to add several footnotes in the book to make it clear that they did not share this opinion.

Since that time, scientists have uncovered more evidence that the Sahara was once rather humid, and had forests and lakes that would have been fine for swimming. The cave is now known as the Cave of Swimmers, which you can read about at Amusing Planet.

US States Ranked from Best to Worst