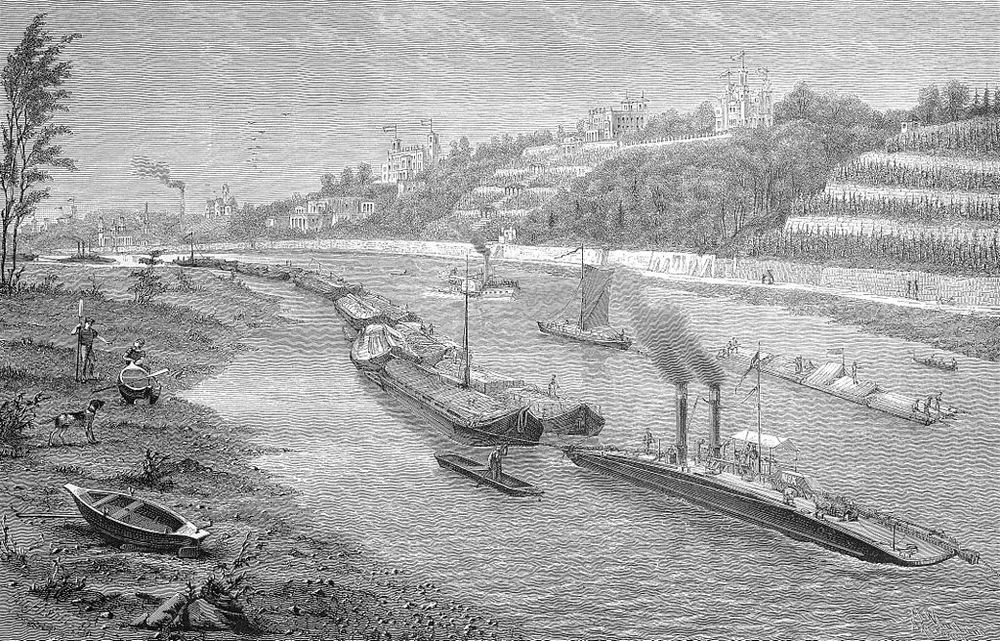 In his travelogue, A Tramp Abroad, Mark Twain describes an encounter with a curious boat on the River Neckar in Germany.

We ran forward to see the vessel. It proved to be a steamboat—for they had begun to run a steamer up the Neckar, for the first time in May. She was a tug, and one of a very peculiar build and aspect. I had often watched her from the hotel, and wondered how she propelled herself, for apparently she had no propeller or paddles. ….

As she went grinding and groaning by, we perceived the secret of her moving impulse. She did not drive herself up the river with paddles or propeller, she pulled herself by hauling on a great chain. This chain is laid in the bed of the river and is only fastened at the two ends. It is seventy miles [one hundred and ten kilometers] long. It comes in over the boat's bow, passes around a drum, and is payed out astern. She pulls on that chain, and so drags herself up the river or down it. She has neither bow or stern, strictly speaking, for she has a long-bladed rudder on each end and she never turns around. She uses both rudders all the time, and they are powerful enough to enable her to turn to the right or the left and steer around curves, in spite of the strong resistance of the chain. I would not have believed that that impossible thing could be done; but I saw it done, and therefore I know that there is one impossible thing which can be done. What miracle will man attempt next?