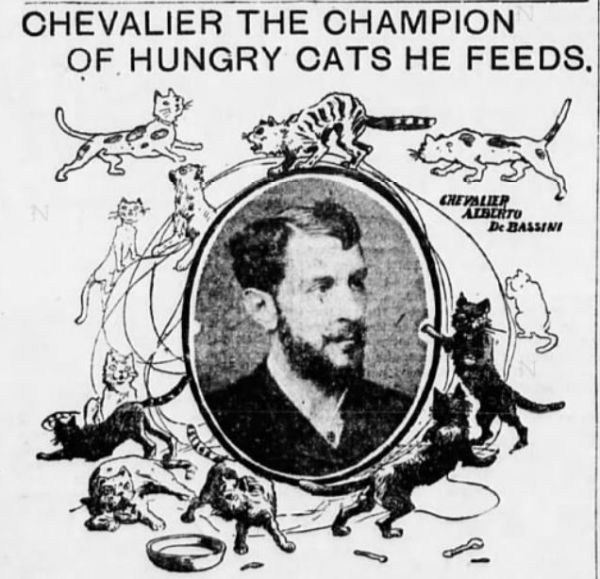 Alberto Gaston de Bassini was a renowned Italian opera singer who settled in New York City in 1896. He sang at the Metropolitan Opera House and gave music lessons. He also collected cats. De Bassini took in all kinds of strays, despite protests from his wife and daughter, and eventually had at least 35 cats, according to his unhappy neighbors. In 1902, a complaint brought a health inspector to de Bassini’s home, and he was given a citation over the cats. De Bassini was indignant, and insisted on taking the matter to court, so as to find out which neighbor complained. The local newspapers covered his arraignment, where the opera star declared he would go to the electric chair to defend his cats.

De Bassini explained that when the butcher came at noon to deliver meat for his own six or seven cats, other starving cats in the neighborhood would show up to see if they could share in the bounty. “The butcher wagon it stop. Then it go away. After it go away I look out the back window and I see pussy there, pussy there and there. I see pussy everywhere.” He said the cats knew it was safe to gather in his yard because he did not kick or otherwise hurt them.

De Bassini continued, “It is impossible for me to witness animal suffering. I could not see those cats starve. To feed them is kind, to see them not feed it is very brutal.”

He told another reporter, “What to ze cat I must say? Oh! It is so ridiculous. I must shake my finger, so, and say to ze cat, ‘I do not like you, Mr. Cat, for because it is ze law.’ It is ridiculous.”

Read about the cat-collecting opera star and the case against him at The Hatching Cat. -via Strange Company

On another note, you really need to see the cat picture in this week’s link dump at Strange Company.

Rating The Chevalier and His Clowder of Cats on Carnegie Hill is 5.0 / 5 Votes: 4
Please wait...
Loading...
Related articles