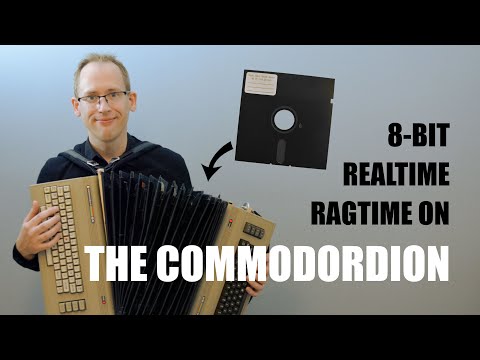 Linus Åkesson is a Swedish musician and programmer, although he has many other interests. He built a musical instrument he calls the Commodordion. With a name like that, you might think it’s an accordion built out of a commode, but no. It’s built out of a Commodore 64! Two of them, in fact.

In the first five minutes, Åkesson explains what it is and plays some music for us, if that’s all you want to watch. Then we have a montage of the bellows-building process, then he explains how he wired up and programmed the electronics. If that’s not enough, you can read about the project in detail at his blog.

Åkesson has built several other strange musical instruments llike the sixtyforgan and the C64 Theremin. You get the idea that anyone in Sweden who is trying to get rid of old Commodores knows that Åkesson will make good use of them. -via Metafilter