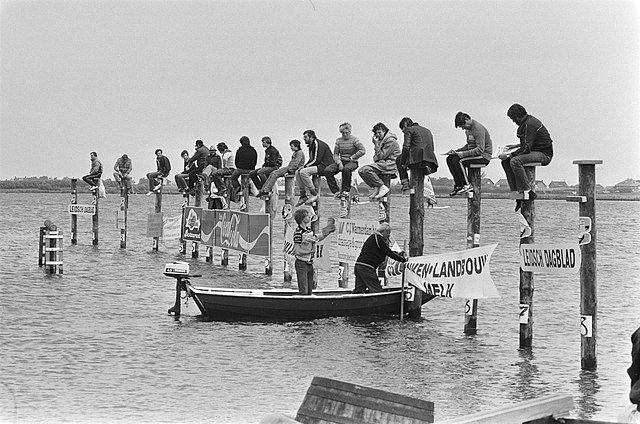 The stylites were Christian monks who, as acts of ascetic piety, spent their lives on top of poles in prayer and fasting. Such mortification of the flesh is not the object of this modern Dutch sport, which involves remaining sitting on a pole longer than anyone else in a competition.

Allegedly, those who first participated in paalzitten–pole sitting–were probably trying to alleviate boredom by sitting on poles in canals.

Don’t ask me to explain that reasoning.

Oddity Central has more information about this thrilling sport, including how it inspired what is considered to be one of the worst movies in Dutch history:

Called “Sportsman of the Century“, it tells the story of an avid Paalzitten practitioner training to break the fictional record of 250 days sitting on a pole since early childhood. He even fathers a baby while sitting on the pole, and proceeds to lose his love interest after refusing to cancel his participation in a Paalzitten competition to help her. He ultimately dies as an old man, sitting on a pole, obviously. In 2006, the film was nominated for two Golden Onions, in the categories Worst Film and Worst Director.

-via Dave Barry | Photo: National Archives of the Netherlands