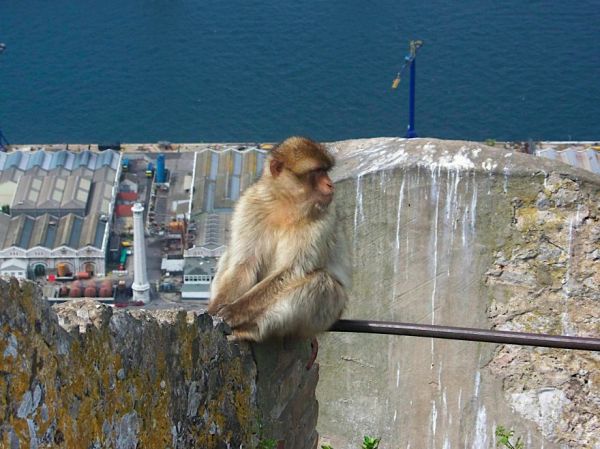 Gibraltar is a curious place. It is a small peninsula at the south corner of Spain, at the point where the Atlantic Ocean meets the Mediterranean Sea. Morocco is only eight miles across the water. Gibraltar is a British colony, one of the few remnants of the British Empire, and home to 30,000 people.

The peninsula is just 2.6 square miles, and consists mostly of sand, rock, and scrub. It is not an especially hospitable place, with little fresh water and few natural resources beyond sunshine and beaches. The plant and animal life is also fairly limited, with a few foxes and rabbits and a decent selection of frogs and lizards. It is a migratory stop for many birds, but they don’t breed or spend much time there. Gibraltar has few trees, just some hardy, shrunken wild olive trees and a bunch of imported palms, shrubs, and succulents from elsewhere in the British Empire, past and present.

And yet there are also roughly 200 Barbary macaques, tailless monkeys native to Morocco and Algeria. On this small, dry peninsula, largely dedicated to tourism and the military, with barely any fresh water and few other mammals, are monkeys.

Monkeys and apes tend to live in warmer climates. They moved out of Europe during the last ice age. But the Barbary macaques have lived in Gibraltar continuously, at least since the early 17th century, when they were included in the first history of the area. Why the monkeys have flourished on the small and inhospitable peninsula is a story you can read at Atlas Obscura.