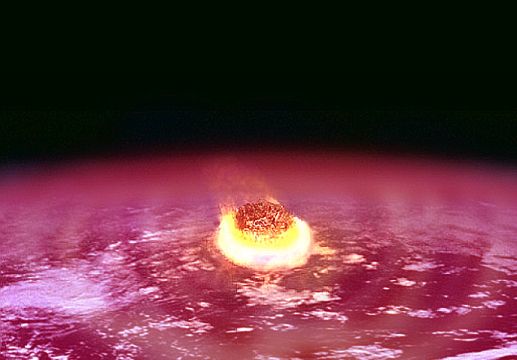 A meteor hit the earth 66 million years ago, which led to the extinction of the dinosaurs and a lot of other life forms. At least that’s the story. The evidence of the event lives in a sediment layer of ash, soot, and debris called the KT boundary, because the impact separates the Cretaceous and the Tertiary periods.

One of the central mysteries of paleontology is the so-called “three-­metre problem.” In a century and a half of assiduous searching, almost no dinosaur remains have been found in the layers three metres, or about nine feet, below the KT boundary, a depth representing many thousands of years. Consequently, numerous paleontologists have argued that the dinosaurs were on the way to extinction long before the asteroid struck, owing perhaps to the volcanic eruptions and climate change. Other scientists have countered that the three-metre problem merely reflects how hard it is to find fossils. Sooner or later, they’ve contended, a scientist will discover dinosaurs much closer to the moment of destruction.

Locked in the KT boundary are the answers to our questions about one of the most significant events in the history of life on the planet. If one looks at the Earth as a kind of living organism, as many biologists do, you could say that it was shot by a bullet and almost died. Deciphering what happened on the day of destruction is crucial not only to solving the three-­metre problem but also to explaining our own genesis as a species.

But in 2013, graduate student Robert DePalma found fossils in the Hell Creek Formation in North Dakota that he believes are direct victims of the asteroid. At the TK layer, he found tekites, glass globules that rained from the sky during the event. He also found plants, trees, seeds, fish, mammals, and dinosaurs that shouldn’t be there together. DePalma thinks they were washed into the valley by a tsunami caused by the asteroid impact.

“We have the whole KT event preserved in these sediments,” DePalma said. “With this deposit, we can chart what happened the day the Cretaceous died.” No paleontological site remotely like it had ever been found, and, if DePalma’s hypothesis proves correct, the scientific value of the site will be immense. When Walter Alvarez visited the dig last summer, he was astounded. “It is truly a magnificent site,” he wrote to me, adding that it’s “surely one of the best sites ever found for telling just what happened on the day of the impact.”

Read about DePalma’s find and also get a fascinating description of the KT event at the New Yorker. -via Metafilter