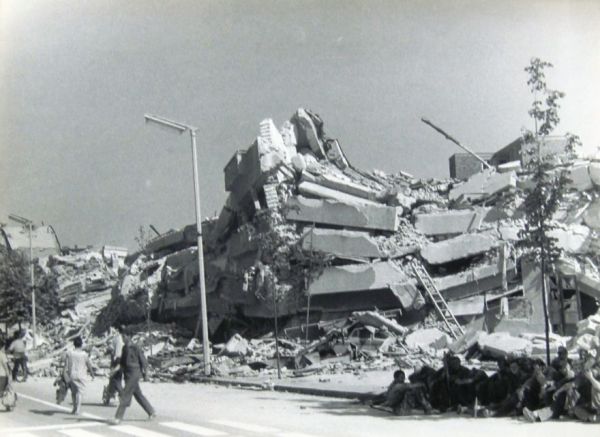 The year 1963 was at the height of the Cold War. The US and the Soviet Union were in a space race and a nuclear arms race. Most of Eastern Europe was behind the Iron Curtain. Then on July 26, an earthquake hit. The city of Skopje, Macedonia, then a part of Yugoslavia, was a shambles, with a thousand people dead, many times that injured, and 75% of its buildings ruined.

By the time the earthquake — whose tremors were felt as far away as Sofia, Bulgaria, and Thessaloniki, Greece — was over, between 150,000 and 200,000 people were left homeless. The Macedonian capital, a provincial outpost of stately socialist structures and lingering Ottoman traces in the Vardar River valley, was decimated. “When the wind blew, windows and chunks of masonry would come tumbling down from the abandoned buildings of the city,” wrote Dennison Rusinow, an American researcher with the Institute of Current World Affairs who arrived in Skopje 10 days later, “and the dust rose chokingly again, smelling of death where death still lay undiscovered.”

But in the aftermath of the tragedy, something marvelous happened: the world came together to help. More than 80 countries sent emergency workers, medical facilities, relief funds, and ultimately architects and city planners to rebuild Skopje. Read about that effort at Ozy.

Rating The Devastating Earthquake That Brought the World Together is 5.0 / 5 Votes: 3
Please wait...
Loading...
Related articles