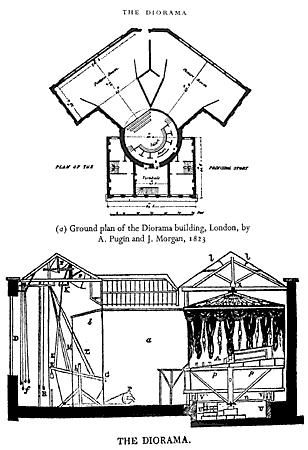 February 20, 1826. People were inside a small theatre in the big city of London, waiting with their eyes open in the pitch black darkness of the room. Suddenly, there was light shining across the room — it was a replica of our Sun. When the viewers’ eyes finally adjusted from the sudden change in lighting, they realized that they are no longer in the theatre, but inside the Rosslyn Chapel in rural Scotland. It was magical, indeed.

The viewers were inside the work of a French inventor, Louis Daguerre. The diorama was one of his many inventions, a multimedia spectacle that took the mid-nineteenth century by storm. The first diorama was constructed in 1822, behind the Place du Château d’Eau (now the Place de la République). Daguerre’s studio was located in the 10th arrondissement, in Paris, rue Faubourg du Temple; the area was shabby and underdeveloped, consisting of old army barracks and a smattering of theaters. Once customers entered the theater, however, they soon forgot their dilapidated surroundings. They were transported, as it were virtually, to places and moments in history: the Black Forest; the Inauguration of the Temple of Solomon; the Great Fire of Edinburgh.

The modern cinema, as well as technological advancements like virtual reality, can trace their roots back to this amazing invention.

Learn more about Daguerre’s diorama over at JSTOR Daily.