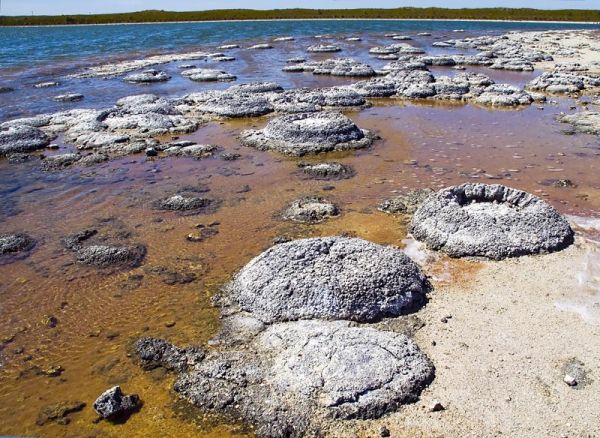 Scientists estimate that the earth is around 4.5 billions years old. In Western Australia, you can see stromatolites, rock formations built by organisms beginning about 3.5 billion years ago. And those organisms are still with us.

With a citizen scientist’s understanding, stromatolites are stony structures built by colonies of microscopic photosynthesising organisms called cyanobacteria. As sediment layered in shallow water, bacteria grew over it, binding the sedimentary particles and building layer upon millimetre layer until the layers became mounds. Their empire-building brought with it their most important role in Earth’s history. They breathed. Using the sun to harness energy, they produced and built up the oxygen content of the Earth’s atmosphere to about 20%, giving the kiss of life to all that was to evolve.

The stromatolites were eventually eclipsed by thrombolites, which were more adaptable. The structures built by these ancient organisms are now under threat from human populations and climate change. Read about them both at BBC Travel. -via Damn Interesting