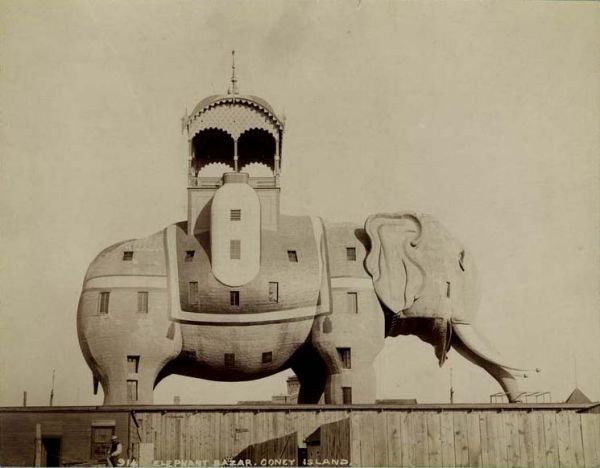 James V. Lafferty made a name for himself in 1882 by building an elephant-shaped building in New Jersey known as Lucy the Elephant. In 1885, he built a second elephant almost twice as tall as Lucy in Coney Island that became known as the Elephant Colossus. This building was 122 feet tall and contained a 31-room hotel as well as various shops in the lower levels. The interior rooms were named after the corresponding elephant organs, which was a novelty and probably aided in navigating the building. The building became a rather well-known brothel during its short life, and inspired the phrase “seeing the elephant” for a stop there. After standing empty for some time, in 1896 the elephant suffered the fate of so many Coney Island attractions and burned to the ground.

You can see more pictures of the Elephant Colossus here. The story of the Elephantine Colossus is just one of the 11 Fun Facts About Coney Island you can read at Mental Floss.