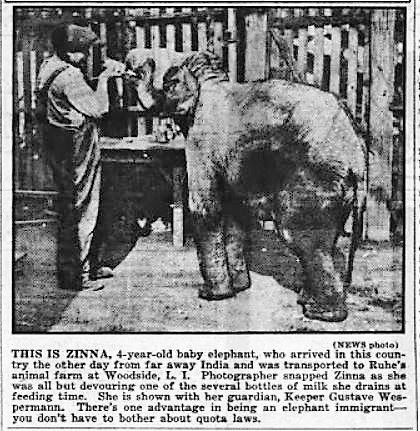 The German Ruhe family ran a large animal trading business in the 19th century. Louis Ruhe moved to New York around 1868 to open an American branch, and by 1904 established the Ruhe Wild Animal Farm in Queens as an import and distribution center for exotic animals. They supplied critters to zoos, circuses, movie production companies, and wealthy private owners, which included monkeys, zebras, big cats, birds, elephants, and more. The residents of the Woodside neighborhood were terrified of the lions, tigers, and “other public enemies.” That fear came to a head one night in 1905 when ten elephants escaped into the city streets.

Woodside has been uncomfortable ever since the wild animal farm, as it is known locally, was opened about a year ago. Every woman in the place has predicted that the animals would escape some dark, cold night and wipe out the town, devouring buildings and inhabitants. These predictions came near becoming true on Monday night… Every one trembled as word was passed from house to house, ‘The Ruhe wild animal farm has broken loose and we shall all be eaten alive.’–Brooklyn Daily Eagle, August 23, 1905

No one was eaten alive, and the Ruhe Wild Animal Farm stayed in business until 1955. Read about the peculiar Queens menagerie, including the elephant escape, the war years, an elephant as a wedding gift, and the devastating fire that destroyed the farm, at The Hatching Cat. -via Strange Company