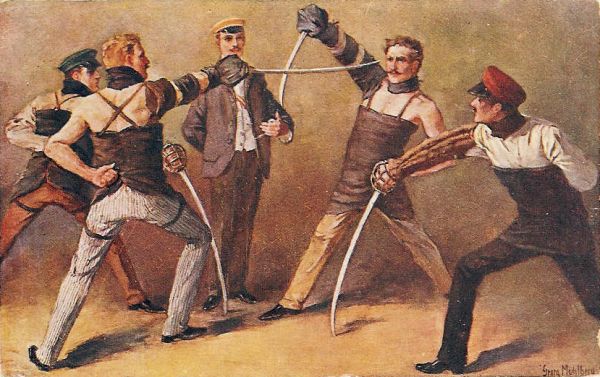 Technically, you can’t call Mensur a sport, because there’s no way to win, even though it is an offshoot of sword fighting or fencing. Mensur is also called German academic fencing, and is a tradition to this day among Studentenverbindungen or student corporations, which seems close to what we know as fraternities. But while fencing evolved to be safer over time, those participating in Mensur kept their swords sharp, and their injuries are a badge of honor.

Deriving its name from the Latin word for “dimension” – referring to the distance between participants – Mensur is a formal duel between two individuals fought using special sharpened, basket-hilted sabres called mensurschläger. Unlike in traditional fencing, fighters – or Paukanten – stand a fixed arm’s length apart and are forbidden from moving their feet or even dodging their opponents’ blows. There is also no scoring nor any designated winner or loser. This is because the aim of Mensur is not swordsmanship, but rather to demonstrate one’s courage and character by taking an opponent’s blows without fear or flinching.

They do wear body protection, and the only blows allowed are on the head. But that’s only the modern version of Mensur. It evolved after bloody student sword fights in the 15th century led to regulated duels. You’ll find Mensur going today in German-speaking countries and some Baltic states, too. Read about the tradition of Mensur and what it means at Today I Found Out.