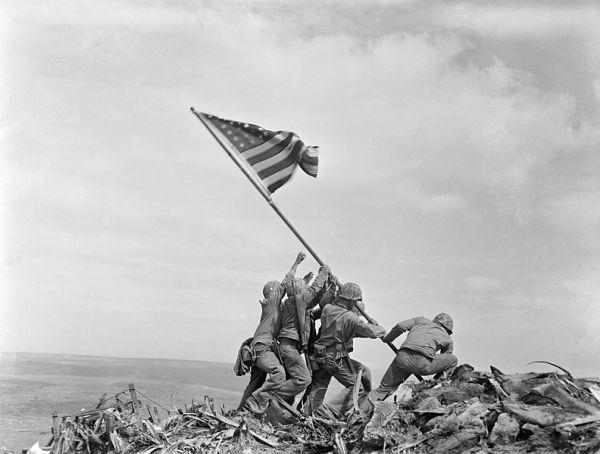 Sunday marks the 75th anniversary of the flag-raising on Iwo Jima, a moment captured by Associated Press photographer Joe Rosenthal during the battle on that island in the Pacific. It has been called the most-copied photograph ever, and you’ll find few Americans who are not familiar with it- it even inspired the Marine Corps War Memorial. For many, it sums up the entirety of World War II. But in 1945, it was received a bit differently.

Such flag-raising images routinely appeared in newspaper coverage of island battles such as Tarawa, Guam and Leyte. The newsreels that millions of American moviegoers watched each week also used footage of flag-raisings to punctuate their reports (for example, those depicting the U.S. capture of Peleliu and Kwajalein). The expectation of a triumphant flag planting was so well-ingrained by February 1945 that Dorman Smith’s syndicated editorial cartoon, appearing in newspapers across the country just a few days before Rosenthal’s photograph, depicted a pair of hands jamming an American flag into a rock labeled “Iwo Jima.”

This was a home front, in other words, that was quite used to images of flag-raisings. One might even say that the American people, rather than being shocked by Rosenthal’s image (as many writers have suggested), actually anticipated it.

Besides that, the actual photo was taken a couple of months before that battle was won! Read the story of the iconic photograph in its historical context at Time. -Thanks, Jim Kimble!