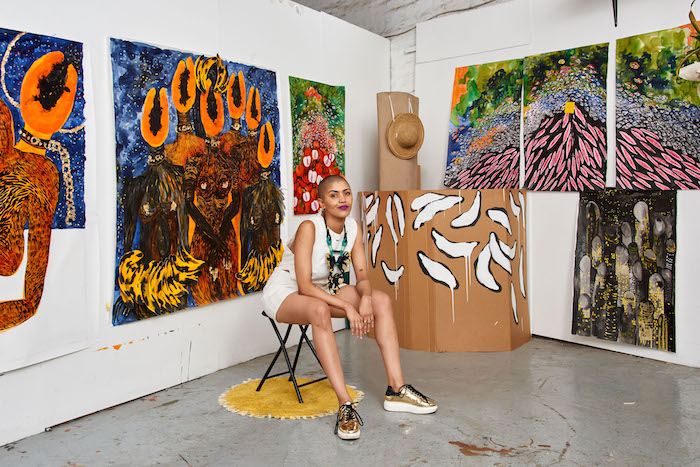 Breaking taboos through paintings and digital media — including Twitter and a sex talk radio show, by addressing issues of gender, sex, pleasure, and abuse — Johannesburg-based Lady Skollie is colonizing London with her first solo UK exhibition, Lust Politics at Tyburn Gallery. Lady Skollie, born Laura Windvogel, tells The Creator’s Project that making art tackling these issues is “sometimes a bit tricky” in South Africa, a country which is alleged to have among the highest rates of rape and sexual violence in the world. “We have things like the ‘bro code,’ molestation, rape — all of these things happen and men aren’t held accountable,” she says. “I think accountability is key for people to heal and for people to feel heard and understood.”

Taking accountability into her own hands, Lady Skollie has a reputation for using her art to directly call out public figures who have been accused or imprisoned for rape. This includes a piece in honor of Khwezi, the woman who accused South African President Jacob Zuma of rape — an offense he was charged for before the case was dismissed the following year. Lady Skollie also made an artwork about South African rapper Okmalumkoolkat, which she tells us got a huge, largely negative response. She says, “Everyone came at me and asked ‘Why don’t you just let it go, he made a mistake.’ That is crazy, letting all of it go. We’re always expected to just ‘Let it go.’” 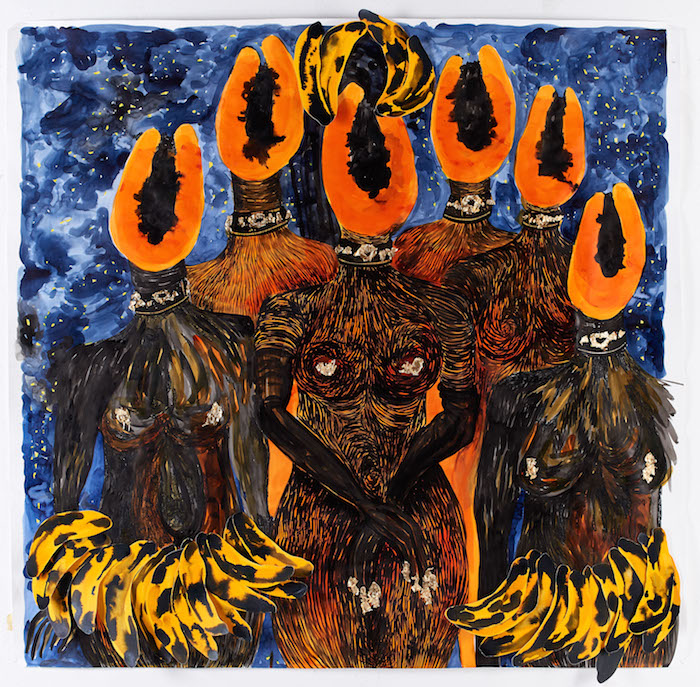 But what can we expect from Lust Politics? Like her online personality, Lady Skollie’s exhibition is loud and proud, using vibrant colors to depict powerful women. The paintings in Lust Politics use fruit such as bananas and papayas, depicting the artist’s discontent with unrealistic sexual standards and the objectification of women’s bodies. The women vary in appearance, some are green and others have body parts made of fruit. According to Lady Skollie, this is her homage to Khoisan imagery, which “plays into my own identity as a colored woman. It also plays into self-hate that really is a killer within colored identity, because we do not have self-love.” 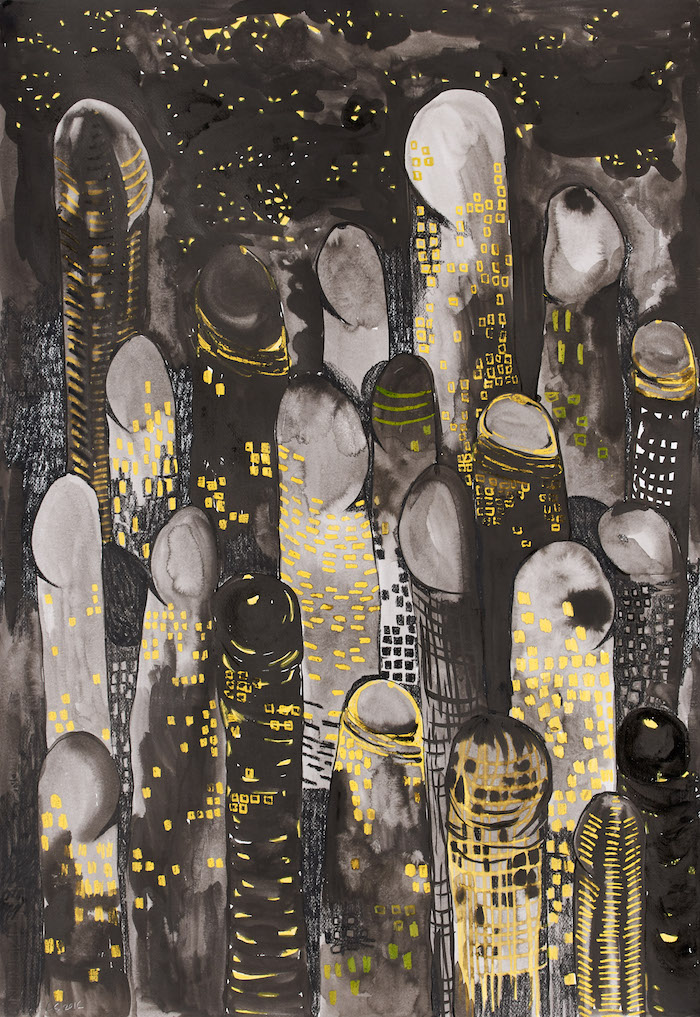 The name “Skollie” comes from an Afrikaans word used to describe a shady character who deliberately breaks the rules and normally refers to a person of color. The artist’s racial identity is central to her work, something which affected her growing up in a predominantly white Afrikaner school in Cape Town. “Men would see colored women as objects and fetishize you,” she explains, an issue tackled in her earlier work Sometimes reluctantly I reflect on all the times I let my pussy to be colonised. 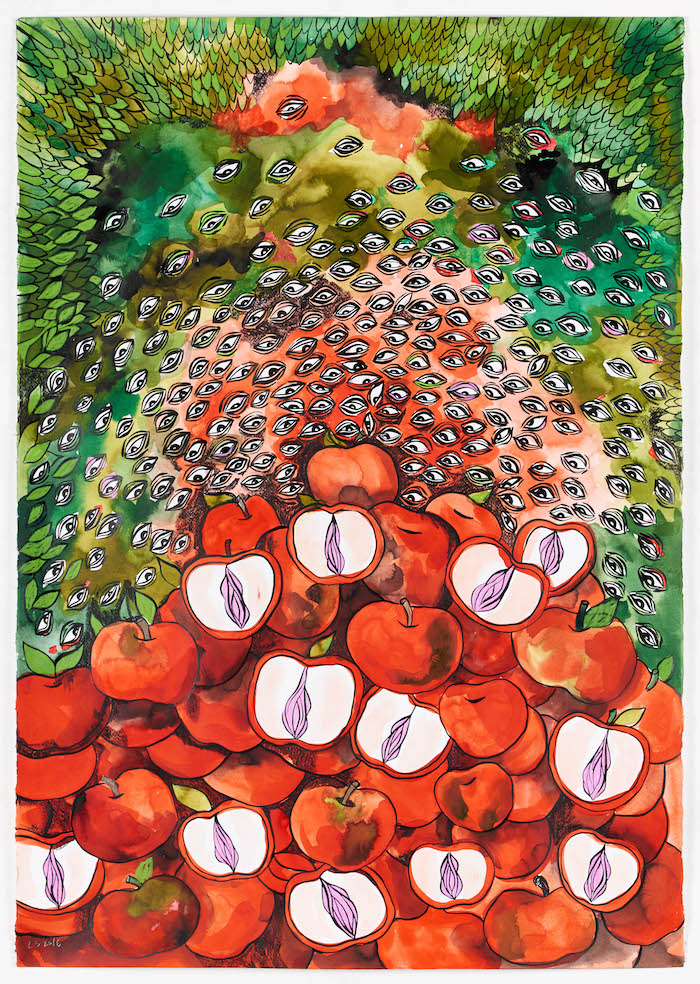 It’s this fusion of confrontational gender critique and her own sensitive, personal story which makes Lady Skollie’s work so powerful. But while it’s clear the artist’s work has an activist slant, Lady Skollie says she’s “not under any misconceptions that I’m going to change the world because I’m painting paw paws [papayas].” Nevertheless, the artist’s finger-up to the patriarchy amidst the “bro code” culture adopted by men in South Africa (and beyond) is undoubtedly brave — and whether people agree with her or not, she’s definitely being heard. Lady Skollie explains that she is excited when she gets messages from women saying that her work has given them power to “confront people or not be quiet for the sake of a man’s comfort.” She continues, “It is time for people to feel uncomfortable, and for people to ask themselves very hard questions about how they relate to women, how they treat them, how they talk to them.” 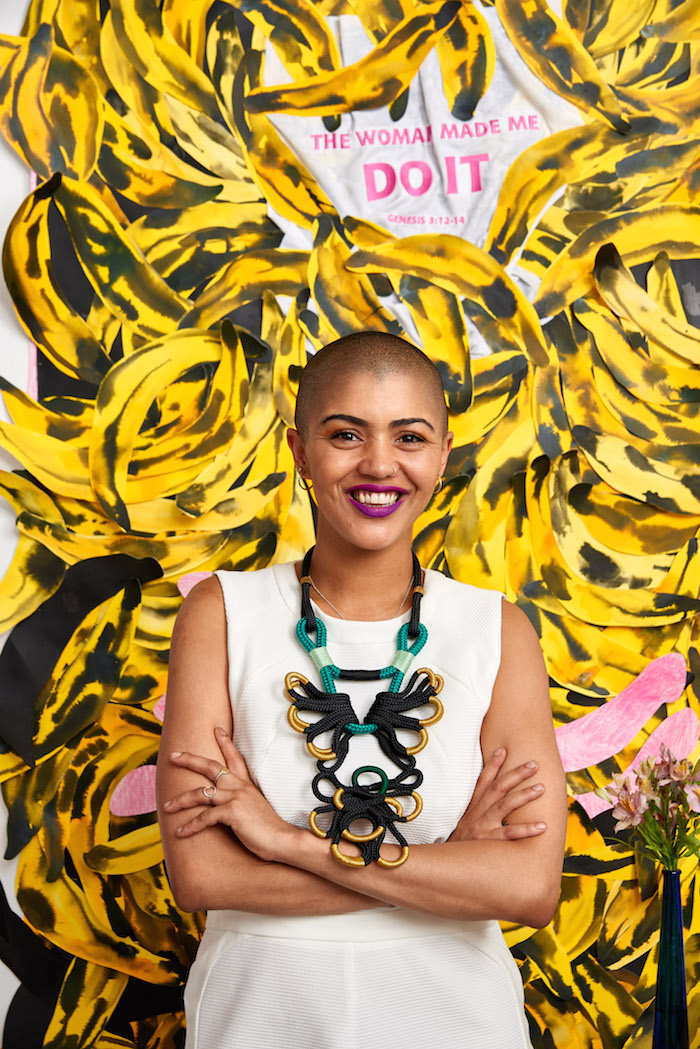 You can see Lady Skollie’s Lust Politics at the Tyburn Gallery in London from January 19 to March 4, and check her out on Twitter and Instagram.