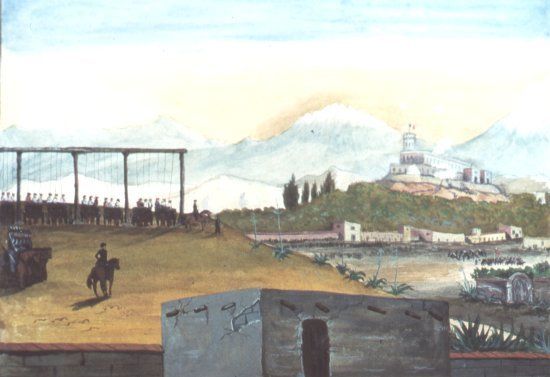 This St. Patrick’s Day, Mexico will honor the Irish as war heroes, specifically a unit that fought in the Mexican-American War. Following the Battle of Churubusco in 1847, the US Army captured thousands of enemy combatants. Hundreds of the men were whipped, branded, and otherwise tortured, and 50 of them were hanged.

The men who died that day were not ordinary enemy fighters. They were captured soldiers from El Batallón de San Patricio, or the Saint Patrick’s Battalion, who had fought fiercely in the Battle of Churubusco just weeks earlier. Many were Irish immigrants who had come to the United States to escape economic hardship, but found themselves fighting in the Mexican-American War against their adopted country. The conflict pitted many Catholic immigrants to America against a largely Catholic Mexico and these soldiers had switched sides, joining Mexican forces in the fight against the United States. They were, for the most, part die-hard believers in the cause around which they had coalesced—defending Mexico—until those very last moments on that September morning. Though they were on the losing side of the war, their actions are still celebrated in Mexico today, where they are viewed as heroes.

Learn the story of the St. Patrick’s Battalion at Smithsonian.