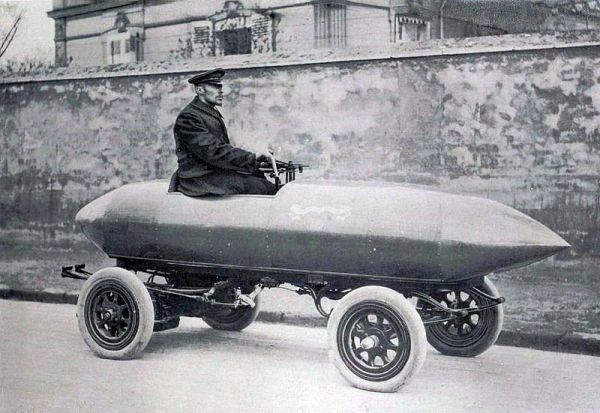 Modern drivers are very much used to going 100 km/h (62 mph), although we do it on paved highways in enclosed vehicles with windshields. None of those things were in play when Camille Jenatzy broke the land speed record in an automobile in April of 1899. Jenatzy drove an electric car he designed himself, called Le Jamais Contente (The Never Satisfied) that resembled nothing so much as a torpedo.

When asked to describe the feeling of traveling faster than anybody had ever done before on a road vehicle, Jenatzy said: “The car in which you travel seems to leave the ground and hurl itself forward like a projectile ricocheting along the ground. As for the driver, the muscles of his body and neck become rigid in resisting the pressure of the air; his gaze is steadfastly fixed about two hundred yards ahead; his senses are on the alert.”

Jenatzy reached the speed of 105.88 km/h (65.792 mph) that day, a record which stood for three years. Read the story of that vehicle at Amusing Planet.