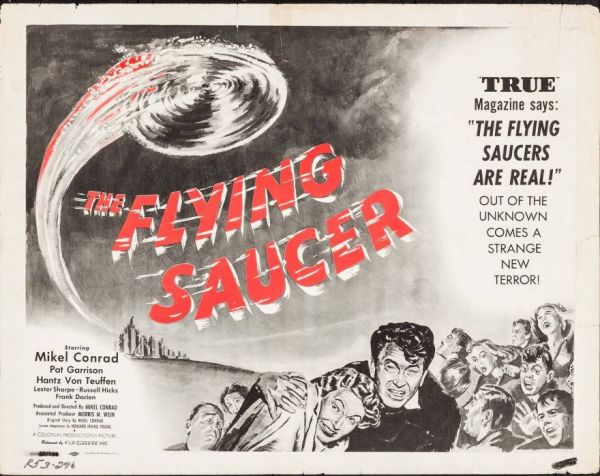 The first official UFO sighting occurred in June of 1947 when pilot Kenneth Arnold spotted nine objects he couldn’t identify as he flew over Mt. Rainier. Once his experience was published in papers across the nation, the floodgates opened and everyone saw flying saucers. The kicker was that Arnold never said the objects were shaped like saucers. He described the movement of the objects with the words “flew like they take a saucer and throw it across the water,” meaning they skipped. But the term flying saucer or flying disc caught on and that’s what everyone else was seeing.

On July 8 of that year, the army released a statement on a “flying disc” recovered from a ranch near Roswell, New Mexico (that later was identified as a weather balloon). An article about it appeared in the Anchorage Daily Times that same day, which was the paper’s first ever mention of a flying disc. The article said, “None have been reported in Alaska, yet.” The very next day, three teenage girls reported a disc-shaped UFO over Elmendorf Air Force Base in Anchorage. Coincidence?

Whatever happened, the very first movie about flying saucers, titled The Flying Saucer, was released in 1950. It was set in Alaska, and had a lot to do with Soviet spies. That’s when the sightings of UFOs in Alaska really took off, with a whole slew of them reported in the 1950s. Read about flying saucer fever in Alaska, and see the full movie at the Anchorage Daily News. -via Strange Company