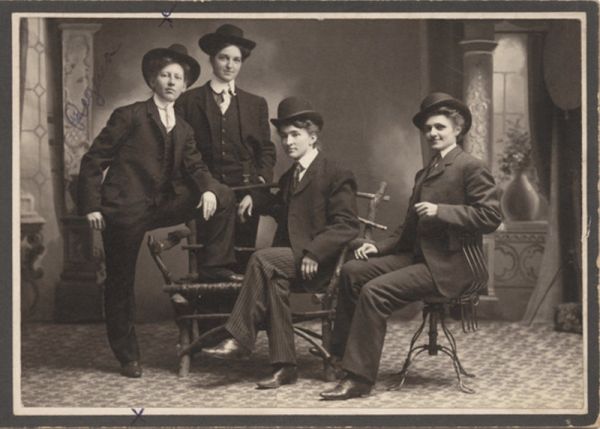 The American West during the 19th century attracted investors, adventurers, criminals, ambitious settlers, and oppressed people yearning to breathe free in those wide open spaces. It’s no wonder that transgender people took advantage of the opportunity to live life the way they wanted to. Historian Peter Boag of Washington State University was researching the history of gender-nonconformity in Portland, Oregon, but stories from the American frontier intrigued him until he expanded his studies into the entire country west of the Mississippi. The freedom that came with those wide-open spaces appealed to trans people who had to hide their true selves in the crowded East. Newspapers covered the outrageous stories from the West, including many of men who made a name for themselves, only to be found having female anatomy at their deaths, and others whose secrets were discovered when they committed crimes- crimes that included cross-dressing.

It was easy for tabloids and historians of the time to explain away trans men as a quirk of the frontier. It was, after all, a land dominated by men: violent, physically demanding, and steeped in the oppression of women. It seemed logical that certain women might choose to disguise themselves as men for safety, or to gain access to power and agency—with no queer motive. “If people thought you were a man, you wouldn’t be bothered or molested, there’s good evidence that some women dressed as men to get better paying employment,” Boag says. The best job most women could hope for in the Old West was cooking or housekeeping. On the other hand, someone assigned female at birth who passed for a man could earn real wages.

They could get into real trouble, too, as the newspapers of the era loved to exploit lurid tales of gender nonconformity. Trans women, on the other hand, kept a much lower profile, since choosing to live openly as a woman was dangerous, hard to explain, and was a step down in status. But there are stories that survive of trans women as well as trans men from the Old West that you can read about at Atlas Obscura.