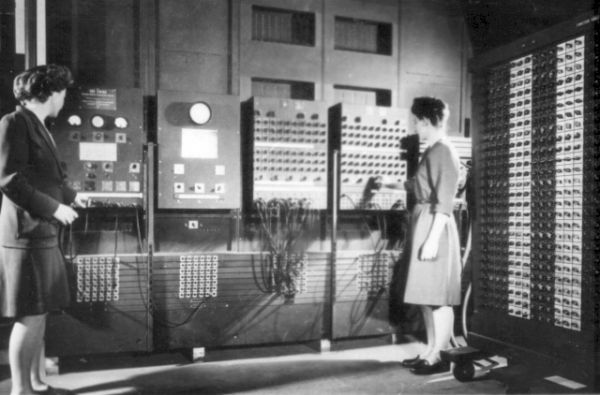 During World War II, women took over many jobs normally done by men at the time, including top secret military support jobs. The army recruited almost 100 women who were adept at differential calculus to calculate ballistic trajectories for firing artillery. The army was also working on a machine, developed by Dr. John Mauchly and J. Presper Eckert, that could do these calculations: ENIAC, the world’s first all-electronic, programmable, general-purpose computer. But who would run the computer? Why, the women who were tops in differential calculus! And they had to figure it out as they went.

To say the women’s programming job was difficult is an understatement. ENIAC had no technical or operating manuals (they would be written the following summer) and no programming codes (written for the next computer by ENIAC Programmer Betty Holberton a few years later for UNIVAC, the first commercial computer). The women studied ENIAC’s wiring and logical diagrams and taught themselves how to program it. Then they sat down and figured out to break down the differential calculus ballistics trajectory program into the small, discrete steps the computer can handle – just as programmers do today.

Then they figured out how to program their steps onto the computer – via a “direct programming” interface of hundreds of cables and 3000 switches. It is a bit like modern programming adding cartwheels and backflips. The women created flowcharts to capture every logical step of the trajectory equation and every physical one too: every switch, every cable, ever setting. With the “old Army spirit,” they did a task no one had done before.

But strangely, in the decades following, the role of women in computer history has been diminished. Read about the ENIAC programmers and their legacy at Freedom to Tinker. -via Boing Boing

The author of the article, Kathy Kleiman, produced a video on the women of ENIAC called The Computers: The Remarkable Story of the ENIAC Programmers. See it at YouTube, part one and part two.